Report: Orlando becoming a key part of the start of the 2020-21 college basketball season 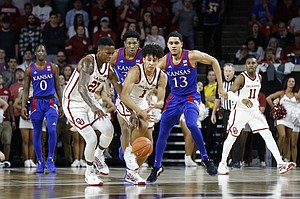 Oklahoma's Jalen Hill (1) and Kristian Doolittle (21) fight for the ball with Kansas' Chris Teahan (12) and David McCormack (33) during the second half of an NCAA college basketball game in Norman, Okla., Tuesday, Jan. 14, 2020. (AP Photo/Garett Fisbeck) by Associated Press

College basketball soon could be taking a page out of the NBA’s return to play to jumpstart the 2020-21 season.

According to a report from CBS Sports Insider Jon Rothstein, Orlando is in line to be the host site for several early-season college tournaments, including the Champions Classic and Wooden Legacy tournaments that the Kansas men’s basketball team is scheduled to play in.

Orlando, which welcomed 22 NBA teams back to play in a bubble format for the completion of the regular season and the ongoing playoffs, has both the court space and the hotel accommodations available to pull off such an undertaking.

Joining the Champions Classic and Wooden Legacy tournament on the list of events that may be relocating to Orlando are: the Jimmy V Classic, Preseason NIT, Orlando Invitational, Charleston Classic, Myrtle Beach Invitational and Diamond Head Classic.

Separate reports from Monday indicated that Maui Invitational organizers also were closing in on plans to relocate that event from Hawaii to the mainland for 2020.

Rothstein reported that sources told him that fans were not expected to be allowed to attend any of the eight tournaments in Orlando. He also noted that there has been some talk about the teams that are headed to Orlando adding additional non-conference games to their schedules that would be played in Orlando, as well.

It remains to be seen if this is the direction college basketball goes or when it might happen. The NCAA’s Division I Council is expected to vote on a start date for the 2020-21 season on Wednesday and it appears likely that the season will begin be at least a couple of weeks after the original start date of Nov. 10.

That was when KU, Kentucky, Duke and Michigan State were supposed to be in Chicago for this year’s Champions Classic.

KU also was supposed to play a two-game, four-team tournament with Georgetown, UCLA and Virginia in Anaheim, Calif., in late November.

KU coach Bill Self told the Journal-World on Monday that KU is waiting for the final word on a season start date before determining dates for the start of practices and boot camp.

The team has been working out together on a limited basis for the past several weeks in Lawrence and will continue to do so until practices begin.

It seems like more of the same nonsense that football and other sports with more athletes are already competing but that basketball needs to wait 2 weeks longer.