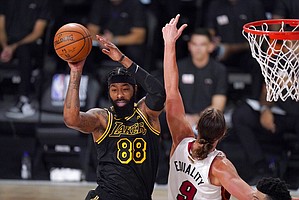 Former Kansas forward Markieff Morris filled his typical playoff role on Friday night in helping the Los Angeles Lakers build a 2-0 lead over Miami in the NBA Finals in Orlando.

Morris has now played in all 17 of the Lakers playoff games. He is averaging just over 17 minutes per game and is vying to become the 13th former Jayhawks to win an NBA title.

The former lottery pick who was signed by Los Angeles in February after starting the season and playing 44 games with Detroit is shooting 49.3% from the floor and 44.7% from 3-point range in the playoffs.

The Lakers and Heat will tip off Game 3 of this year’s Finals at 6:30 p.m. Sunday, when Miami will look to make it a series and the Lakers will attempt to take total control.

Sunday’s game will be on ABC.