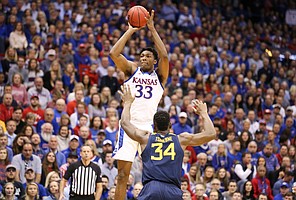 Kansas forward David McCormack (33) pulls up for a shot over West Virginia forward Oscar Tshiebwe (34) during the first half, Saturday, Jan. 4, 2020 at Allen Fieldhouse. by Nick Krug

Even with all of the talent, versatility and excitement in the Kansas backcourt this season, the one player many KU fans can’t wait to see is junior forward David McCormack.

For the first time in his Kansas career, McCormack will be playing without Udoka Azubuike in the mix, opening the door for the Virginia native to inherit a monster role as KU’s top big man.

Whether he does that or not — or if he simply continues to be a solid part of KU’s front court puzzle — remains to be seen, but McCormack should have every opportunity to deliver his best season to date in 2020-21.

One of the more challenging things about predicting McCormack’s upcoming season was eliminated last week when senior forward Silvio De Sousa announced he was leaving the program.

That opened the door to add major minutes to what already was going to be a major role for McCormack. And it’s now clear that the Jayhawks will roll into the season with a 1-2 punch up front of McCormack an Lightfoot, two proven players with experience who should have no problem co-existing in KU’s rotation.

It remains to be seen exactly what that will mean — will they split minutes equally at the 5, will they play together some or will one guy get the bulk of the work? — but regardless of how it plays out, both KU and McCormack are counting on a breakthrough season for the junior from Norfolk, Va.

He will: At least double his career rebounding numbers

During 63 games in his first two seasons with the program, including 31 starts, McCormack has averaged 3.6 rebounds in 12.5 minutes per game.

Last season, he recorded a career-best 4.1 rebounds per game and still played just 14.5 minutes per night.

This year, with his playing time expected to at least double, McCormack’s rebounding numbers should do at least that.

There have been times throughout his career where McCormack has looked like the best rebounder on the floor. But, because of his inconsistent usage, those times have not always turned into the norm.

There’s no reason for that not to this year and McCormack will have every opportunity and all kinds of motivation to deliver.

Because of KU’s depth in the backcourt and the presence of Lightfoot, McCormack’s minutes-per-game total won’t triple reached 37.5. But his 12.5 mpg career average should more than double, and McCormack should be capable of pushing the 30-minute mark on a regular basis.

If he does, that will create the potential for his numbers to balloon at the same rate but, in actuality, could produce an even better rate because of the opportunity to be a bigger part of the action and more in the flow of the game when he’s out there.

Consider this next stat as an example of the potential that figures to exist.

According to hoop-math.com, McCormack recorded 20% of all of KU’s putback baskets (18 of 88) during the 2019-20 season. That was in limited time and as a second option. It also ranked second to Udoka Azubuike, who finished with 30 putback baskets for 34.1% of KU’s total.

But with Azubuike gone — and nine other putbacks from De Sousa, Devon Dotson and Isaiah Moss gone, as well — Kansas will have 44.3% of its putbacks from last season to hand out to players on this team.

McCormack won’t get all of them, of course. And who knows how many more or less missed shots the Jayhawks will toss up in 2020-21. But even if the junior big man gets half of those that are now potentially available, while still getting his own share, as well, his percentage vaults up over 40% and his rebounding numbers climb with it.

That’s just from having the opportunity and being on the floor more, and that should be a theme of McCormack’s junior season.

He won’t: Come anywhere close to shooting the type of field goal percentage that Udoka Azubuike did

By finishing his time with the Jayhawks as a 74.6% shooter, Azubuike shattered KU’s career record for field goal percentage and also set a new NCAA record for the same mark.

McCormack won’t do that for a couple of reasons.

First, he’s not nearly as unstoppable in the paint as Azubuike was.

Second, he has and isn’t afraid to use his jump shot. And while that could work out as a weapon of sorts for the Kansas offense — think about that opening up driving lanes and angles for the KU backcourt — even if he hits jumpers at a 50% clip, he still won’t come anywhere near climbing much higher than 60% for his overall number.

Nobody is asking McCormack to be Azubuike. Sure they want him to be physical and clean up the glass and create problems for opponents in the paint, but he has neither the size nor the wingspan or bully-ball nature that Azubuike played with so often and so well when healthy.

McCormack’s offensive production will be fun to watch. And he’ll have his moments where he looks like he might rip down the goal. But there’s more to his game than that and he’ll be happy to display all of it this season.

We already talked about McCormack’s rebounding potential and the fact that greater opportunity opens a lot of doors for him this season.

So why not expect him to cash in on that?

By virtue of the position he plays and the way the Jayhawks run their offense, getting to 10 points per game should be a given for McCormack.

After all, he holds a career average of 5.3 points per game in just 12.5 minutes so he basically needs to make two more baskets and a free throw per game to get to 10.

If he doesn’t do that, he’s probably struggled to the point where he’s not playing as much as many are expecting him to.

Assuming the double-digit point total, the double-double average will come down to what he does on the glass.

It’s a monster ask for him to average double digits in both categories for the season. And there’s a reason that players like Azubuike (15 last season) and Thomas Robinson (KU’s single-season leader in double-doubles with 27 in 2011-12) are still talked about for the monster double-double seasons they delivered under Self.

But McCormack is highly motivated and ready to prove himself as a go-to type of player. Plus, he’s put in the work and loves a challenge.

It would be an all-Big 12/All-American type season if he delivers, but there’s no reason to think it can’t happen.