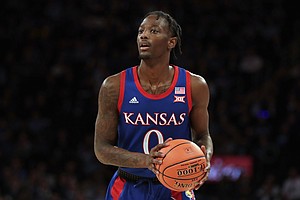 Kansas guard Marcus Garrett (0) in action against the Duke during the first half of an NCAA college basketball game Tuesday, Nov. 5, 2019, in New York. (AP Photo/Adam Hunger) by Associated Press

With the official start of practices now just two weeks away, it’s time to take a closer look at the players who make up the 2020-21 Kansas basketball roster.

That means, it’s time for a little “He Will, He Won’t, He Might” action here at KUsports.com.

During each of the past few preseasons, we’ve broken down the KU roster by looking at each player and predicting what they will, won’t and might do during the upcoming season.

Sometimes that means setting records. Other times it addresses playing time or a particular role or even a feat that won’t be accomplished.

But we always try to make each one go a step beyond the obvious and also toss out a few bold predictions for the KU roster.

Because of the depth, talent and versatility on this year’s roster, the bold predictions were a little tougher to come by. After all, KU coach Bill Self and his staff have so many options and so many different ways they can play during the 2020-21 season.

So it should be both an entertaining season and one that differs wildly from what we saw in 2019-20, when the Jayhawks relied heavily on Devon Dotson and Udoka Azubuike and rolled to a 28-3 record entering the postseason.

We’ll start this thing off with the seniors — Marcus Garrett, Mitch Lightfoot and Silvio De Sousa — and will unveil this year’s “He Will, He Won’t, He Might” predictions for the Jayhawks during the next few weeks.

Without further ado, let’s kick this year’s series off with the team’s most experienced player and obvious leader — senior guard Marcus Garrett.

He will: Record 66 or more steals, making him just the seventh Jayhawk all-time to crack 200 for his career

The number of steals Garrett needs to join Club 200 is low by his standards. And even in a season that will start late and be trimmed down because of the pandemic, Garrett should easily swipe 66 steals.

That’s less than 2.5 per game during the expected 27-game regular season and well off the mark of Garrett’s state goal of getting five steals each time he goes out there.

That doesn’t always happen, of course. But he did record three or more steals in 10 of KU’s 31 games last season.

Garrett has never reached the 60-steal mark during his Kansas career. But his steal total has improved during each of his seasons in Lawrence — 35 as a freshman, 43 as a sophomore and 56 as a junior — and there’s no reason to think that trend cannot continue during the 2020-21 season.

Remember, Garrett got to 56 a season ago despite missing chunks of a couple of games because of ankle injuries.

Regardless of whether he gets to 66 this season to crack 200, he needs just 39 to pass Tyshawn Taylor for 13th and a spot in the media guide, 48 to pass Adonis Jordan for 10th and 64 to move ahead of former teammate Devonte’ Graham, who currently sits in seventh place with 197.

Provided the season plays out in full, by February, Garrett should be starting to catch and pass several players on KU’s all-time steals list.

He won’t: Have to play the 4 at all this season

I’m pretty sure I said this exact thing last year (either here or in another article) but it seems even more accurate this time around.

For starters, Garrett is this team’s point guard and will likely be far too valuable in that role to move him around too much on defense.

Beyond that, the Jayhawks have no shortage of players who can play the 4 this year. And that’s whether they play big or small.

Mitch Lightfoot is one option. And either David McCormack or Silvio De Sousa also could log minutes at KU’s other big man spot.

Beyond that, Jalen Wilson, Tristan Enaruna, Christian Braun and even newcomer Tyon Grant-Foster all have the ability to play big, using their strength and length to guard stretch 4s and other versatile wing types that KU’s opponents might play in that spot on offense.

Garrett obviously can still play the 4 if asked. And it’s definitely possible that for a possession here or there at different points throughout the season that he might need to.

But it’s hard to envision it happening too much unless the Jayhawks get into trouble. Garrett will be the guy that makes everything go on both ends of the floor for the Jayhawks this season, both by initiating KU’s offense and suffocating the attack of KU’s opponents.

He might: Be the Big 12 Player of the Year

Garrett enters the 2020-21 season as the Naismith Award’s reigning defensive player of the year. And we already know what he’s capable of doing on that end of the court.

The question surrounding Garrett’s ability to elevate his game into both player-of-the-year and NBA-draft type levels comes on the offensive end.

And there are plenty of people out there who think Garrett is more than capable of being as good offensively as he has been defensively.

It might not look the same as what you think of from an offensive force. Garrett’s big games won’t look anything like Azubuike’s. But they might be equally as impressive.

Scoring 10-14 points per game while also dishing seven or eight assists is a wildly productive night. And there’s no reason to think that Garrett can’t do that on a regular basis this season.

For one, as one of KU’s best options off the dribble and a guy who can live at the free throw line, he’ll have plenty of opportunity to score. For two, I think Garrett is ready to unleash a side of himself that KU fans haven’t fully seen.

That mindset is tied to that whole last-time-around mentality and now that he’s finally out of the shadows of bigger personalities and more talented offensive players, it could be Garrett’s time to shine.

Even if he does, there are several other talented players in the Big 12 who will have plenty to say about who wins the conference's MVP award this season. But Garrett certainly seems poised to be in the conversation.

How many days till tipoff? Is anyone running one of those countdown sites?

Thanks for a good article, Matt. One quibble: it may not actually be Marcus's last time around, since no players are using up eligibility this year. If he wanted to, he could come back next year, couldn't he? Or is it different for basketball?