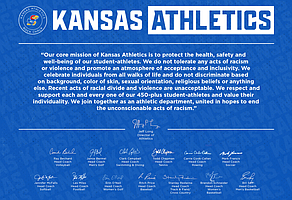 The "Unified Against Racism" statement released by Kansas Athletics on May 30, 2020. by Matt Tait

Amid the nationwide protests against racism and police brutality that were sparked by the death of George Floyd in Minneapolis, University of Kansas athletics leaders and several other sports figures with KU ties are speaking out.

In a joint statement issued Saturday by the athletic department, 13 KU coaches and Athletic Director Jeff Long called for an end to racial divides and violence.

“We join together as an athletic department, united in hopes to end the unconscionable acts of racism,” the statement said.

And in their own statements, men’s basketball coach Bill Self and football coach Les Miles said they were greatly saddened by the deaths of Floyd “and too many others.”

“It is incomprehensible that this level of racism still occurs in this day and age,” Self said. “And it’s unacceptable.”

Miles wrote about how he values diversity in his football program, and he said he has always has tried to encourage all of his players “to go be leaders and make a positive impact in the world.”

“My heart hurts as I reflect on the racism that still exists in this country and the civil unrest we currently find ourselves in,” Miles’ statement read. “Regardless of race and color we cannot keep turning a blind eye to those that need our support through words and actions now more than ever.”

Added Self: “We must be better.”

The statements from KU’s coaches on Saturday night were just a few of thousands of condemnations of racism from coaches and athletes across the country at all levels of college and professional sports.

On Sunday night, KU women’s basketball coach Brandon Schneider tweeted about how he'd spoken with his wife, Ali, and their two young sons about the protests sparked by Floyd’s death. Schneider said he and his family would lean on their Christian faith, and that he emphasized to his sons that they “have a responsibility to be part of the solution.”

“We stand together in promoting peace, justice, equality and unity in the fight against racism,” Schneider wrote.

Late last week, former KU All-American Nick Collison shared that he'd donated $20,000 to the NAACP Legal Defense Fund “in the Memory of George Floyd, Ahmaud Arbery and so many other people whose lives weren’t valued because of the color of their skin.”

“I am so angry and disgusted with so much of what I have seen,” Collison tweeted. “... I have been inactive for too long. This is what I can do today. Join me and do what you can do today.”

“How many more people need to die?” he asked in a tweet. “... I will continue to pray for our athletes in these times. It starts with leadership.”

Danny Manning, KU’s all-time leading scorer and rebounder and a former Self assistant, also took to Twitter to offer his thoughts.

Manning, who played for 15 seasons in the NBA after his four-year KU career, shared that he often had talks with his teammates, along with the players he coached at Kansas, Tulsa and Wake Forest, about being able to talk openly and honestly about social change.

“I always thought these talks assisted us in creating the change we need within our world,” Manning wrote. “We need more peaceful, transparent and educational conversations so we can eliminate these tragedies.

“We can’t keep talking about coming together when there is a tragedy. We must have a better sense of empathy. We must come together in peace and love.”

“No one should have to worry that they will be treated differently, or worse yet fear for their lives on a daily basis, simply because the color of their skin or where they are from.”