KU assistant Jerrance Howard one of ESPN's top 40 under 40 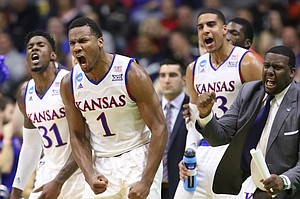 As college basketball’s veteran coaches continue to get up there in years, people are always on the look out for the next group of coaching talent that one day will take their place.

Not necessarily by replacing them at any particular school, but by moving into their 50s, 60s and 70s and holding down the titles of college basketball’s elder statesmen, with wisdom, experience, and most importantly, accomplishments coming out of their ears.

ESPN.com recently took a look at the 40 best college coaches under age 40 and the list included a Jayhawk.

Wrote ESPN’s Jeff Borzello: “Howard has had a reputation as one of the nation's best recruiters dating back to his time at Illinois (from) 2008-11. The Peoria, Ill., native is well-connected in Chicago and the Midwest but also had success at SMU under Larry Brown. Bill Self, who coached Howard as a player at Illinois, hired him in 2013, and Howard has continued his recruiting prowess in Lawrence.”

The list, which also featured 15 “just missed” candidates, included 26 current assistants and 29 current head coaches. That Howard was among them is hardly a surprise.

Despite not yet hitting 40, Howard, who ranked as the seventh best assistant coach on the list, already has worked at some high-level programs and with some of the best coaches in the game.

In a separate ESPN piece, in which the authors of the list debate the order and their process, Myron Medcalf said he thought Howard needed to be ranked higher.

"I think Kansas' Jerrance Howard is one of the best assistant coaches in the country for one of the premier programs in America, so he's too low, in my opinion," Medcalf wrote. "He has found success during stints with both Bruce Weber and Bill Self, and has formed special bonds with the players on the Kansas roster, while evolving into an important voice on the bench and sustaining the talent pipeline as one of the top recruiters in the country."

Set to enter his eighth season on the bench at Kansas, Howard’s youthful exuberance and positive attitude routinely have made him a favorite of the KU players. He often has been able to help the rest of the Kansas coaching staff relate to what the Jayhawks’ young guns are going through and how they see the world.

KU head coach Bill Self, who turns 58 in December, is also strong in that department, but there are a couple of areas that Self is happy to let Howard handle, with music, culture, shoes and social media being chief among them.

Howard, who comes across as a solid blend of old school and modern, is happy to jump into all of those aspects of relating to the KU players, and his ability to do that at a high level, while still commanding respect and flashing his knowledge of the game, is one thing he has in common with a lot of the other 40-and-under coaches on ESPN.com’s list.

How does one know if an assistant coach can actually coach? They have experience with recruiting and preparation but as far as calling the shots, they are spectators.

If there is anything worse than the Grammy Awards it is this numbskull operation.

This doughboy cheating pile of crap has accomplished exactly zero as a coach but succeeded in driving drunk and lying about it. Fire this staff and get some Friggin real men involved in the program. No need to have another lying flubber around.

Bill suspended him for marijuana possession (BFD) but drunk driving? Are you sure?

It is fair to bring up his past, but let's let judgement be made by those who know the complete man. I know I would not want to be judged by only my worst moments in life.

"And now, The envelope please!
Ladies & Gentlemen, the winner of the 2020 Gripey Awards is......
Brett McCabe!!"
"Congratulations, Brett!, You showed us all how hard work & determination can pay off! You da Man!"

Off the Subject, I just finished reading the Biography "PHOG" written by Scott Morrow Johnson. Danny Manning called it "A great read." I agree, a must read for Jayhawk Fans interested in learning more about Doc Allen and KU Basketball History. Rock Chalk!

Yes, it is a "great read"! One insight was the impact Phog had on KU football, and it was not positive.

Our man Snacks has had a wee bit of weed trouble - NOT drunk driving.