KU, others produce their own "One Shining Moment" montages for 2019-20 season 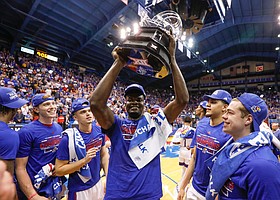 Kansas center Udoka Azubuike (35) hoists the Big 12 conference trophy after the Jayhawks defeated TCU 75-66 to claim at least a share of it on Wednesday, March 5, 2020 at Allen Fieldhouse. by Nick Krug

Every April, whether the Jayhawks fall in the second round or reach college basketball's final weekend, the "One Shining Moment" montage at the end of the NCAA Tournament is a popular watch for Kansas fans.

Some want to see how many times the Jayhawks are shown. Others want to relive the entire tournament or make bets on whether this play or that play, this person or that person, makes it into the final farewell from CBS.

Remember the year Tyler Self made it into the 3-minute recap? Or how about in 2008, 2012 or 2018, when the Jayhawks reached the final stop and were featured several times throughout those "One Shining Moment" memory capsules?

It's a thankless task to try to encapsulate weeks of "madness" into just a few minutes. And yet, most every year, they absolutely nail it.

There was no madness this year, of course. So schools were left to their own devices when it came to delivering the "One Shining Moment" fun. And boy did they deliver. I've seen half a dozen so far, with Kansas and Baylor and Illinois putting together their own team-specific "One Shining Moment" reviews. And each one of them has been outstanding.

I'll definitely spend part of the rest of the day searching for more. And I'm sure they're out there or will be coming in the days ahead.

In fact, this seems like kind of a cool way to recap every season. I'm not saying the schools should hijack the "One Shining Moment" montage for themselves moving forward. But why can't each school, in addition to what CBS and the NCAA put together for the broadcast on that final Monday of the season, create their own tradition and put out something similar with the song of their choosing?

That would be cool and would be a great way for programs to honor and celebrate each team, as different or successful as they may or may not be.

I don't have any suggestions for KU's song. But I'm sure we could throw together a list of some pretty good classics that would stand the test of time year after year. "Dream On" works for the pregame video. Maybe it's repurposed here for the postseason recap.

It would take nothing away from the NCAA Tournament and "One Shining Moment" and would merely be another way fans of college basketball can celebrate and memorialize their teams that they cheered for with their hearts and souls for months.

Time will tell on if that idea ever takes off. No big deal if it doesn't. But either way, here's a look at the 2019-20, KU-specific "One Shining Moment" montage that puts a nice bow on a great season that encountered a tough ending.

Man, what a season.

These memories, moments, and achievements will last a lifetime. #OneShiningMoment #RockChalk pic.twitter.com/TqLBfuUMUD

"Won't get to see that awkward look on NCAA commissioner Mark Emmert’s face when he would have handed Bill Self the trophy after Kansas would have won the NCAA Tournament?"

He's got that right. We all know that NCAA would love not having to give KU the trophy.