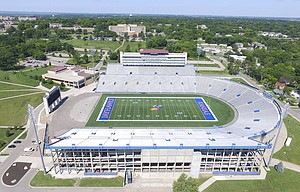 The only thing sports leaders should be promoting for fans right now is big-screen televisions, because the only way sports will have a chance to resume is if teams stay isolated and fans stay home.

Even without fans, it’s far from a guarantee that things will go smoothly enough to actually have college sports, baseball, football or the resumption of the NBA season. But at least if league and school officials pull the plug on the idea of fans in the stands today, they can put all of their attention and resources toward salvaging the 2020 seasons.

Owners, administrators and facility operators have enough on their plates without having to worry about things and people they can’t control. Even without fans, you’ve got a big challenge on your hands to keep athletes and coaches healthy and facilities and equipment sanitized at all times.

Keeping teams in a pseudo-isolated "bubble" isn't foolproof, but it can work if there are strict rules and the people living inside the bubble all have the same agenda. But when you start inviting people from the outside world into the bubble, you’re introducing a lot of variables that the sports world can't afford right now.

True, no fans will mean less revenue. Schools and franchises will be missing out on ticket sales, concessions, parking and more. But the hit taken there is nothing compared to the crippling blow they’d take if they try to bring too many people in too quickly and the whole thing falls apart.

That’s especially true in the college ranks. The cancellation of the NCAA Tournament and other spring events created enough of a financial hole. University athletic departments simply cannot face the idea of losing football television revenue on top of that.

So why not come up with a product that’s both safe and made for television?

It’s 2020. Get creative. Mic up the players and coaches. Figure out some new interactive features that will bring fans closer to the action. It’s worth a try.

After all, these seasons, no matter how they go, are going to forever be remembered as the weirdest and wildest on record. You might as well try to have a little fun in the process. Besides, whatever new initiatives don’t work can always be tossed out when things go back to normal.

Who knows? You might even stumble upon an idea that revolutionizes the way sports are consumed by fans watching at home.

I know it’ll sting. I know empty arenas will be a drag for both the players who feed off of them and the fans who usually fill them.

But at least watching on TV would provide a much-needed distraction from all of the craziness that may still lie ahead.

And you don’t need fans in the stands for that.

This makes way too much sense to ever hope that it'll be done. Greedy admins and owners will say that they're just letting in a few people and will engage in social distancing and when that works without any obvious immediate repercussions, they'll let in a few more. Suddenly, they'll "remember" how much money they cold be raking in and people either too stupid or too willful (or both) will start proclaiming that keeping them out of games is a violation of their "rights" and the floodgates will open.

I desperately want sports to come back because I'm taking the pandemic seriously and I really want some kind of distraction. And I will watch the everliving hell out of KU sports on TV if I can and if I'm convinced that the athletes are safe (because as much as I want sports, I don't want to participate in supporting them if they put college kids at risk for no money). But once someone starts allowing people to attend, everyone else will and it'll be a race to the bottom.

Why should we "follow the rules" when rioters and looters aren't held to the rules? A government that fines or arrests citizens for going to church or holding a BBQ in the privacy their backyards while allowing rioters and looters and BLM "warlords" to run amok with impunity isn't worthy of our obedience.

Yup. you're still a jackass.

Honestly..and I'm hope I'm wrong..but I just can't see the NHL and the NBA finishing their seasons and MLB starting it's season. The NFL will start it's season and fatalities be damned!!

Literally the last thing I ever want to “watch” are mic’d players. When I listen to sports radio, as soon as they say a coach or player is coming on, I turn the dial. Every comment is couched, coached and and so uninteresting.

How about, instead, diving into the real grittiness of the sport? Less talk, please. More real, please.

I remember the first time I sat near the court in AFH. The most memorable thing was marveling at Cedric Hunter and his unending motion. He simply never stopped. I remember it vividly to this day. It was impressive to watch. More of that. Cheesy, irrelevant in-game commentary is exactly the opposite of what we need now.

All of this bs with player mansions, personal stories and contrived entertainment is so unbelievably trite. How about, if it is safe, we just watch some football?

Mic'd up doesn't generally refer to in-game interviews, Brett. It's more raw audio that includes the sound and speed of the game, players talking trash and clowning around with each other and on-the-fly conversations with coaches, teammates and officials.

I could watch mic'd up segments for 12 hours straight. Love 'em!

Tony Romo does it right, in my opinion. One of the very few.

I’m so eager for the resumption of sports, but I just don’t see how it will work. I just KNOW that some line man would spit in the face of the opposing lineman to open a hole for the running back, or vice versa.

Physical contact means a spike in cases, which probably means a severe case or a death, which means suspension of games.

Interesting as the CDC is close to downgrading the Covid-19 under "Pandemic ". I just wish we could get real statistics. In Wisconsin, only 230 people are in the hospital, out of 5.6 million citizens.

No fans in the stands? At Memorial Stadium? Well, it will feel like a typical year of KU football, then, won't it?

No fans in the stands at Kinnick Stadium will be VERY atypical, though.

If conditions are so dire that fans cannot attend - CANCEL the game(s).

I have to think that's on the table along with a dozen or so other scenarios.

For what it's worth, my take on moving on from fans in the stands wasn't necessarily a reaction to how dire things have (or will) become, rather me making the point that all of the resources should be put toward making sure we can play and nothing else right now.

Want to cancel the American culture completely? This is how you do it.

Is this what you want, Matt?

Nope. In my opinion, this is just a temporary solution to a temporary problem, one that none of us have ever experienced or had to handle.

The goal for everyone — I would assume — is for things to go back to "normal" as soon as possible, hopefully early in 2021, which, if you think about it, isn't that far away.

The games and sports in general are a huge part of American culture and, if it were me in charge, my entire focus would be on keeping everyone as safe as possible and finding a way to somehow still have sports in 2020 regardless of what temporary changes that brings about.

Thanks for the piece Matt. I think this thing is way overblown.......by a long shot. But, just when I think things can’t get any more “moronic”, somebody says, “Hold my beer”. I expect you are pretty close to being right, there will be no fans and a shortened season, meanwhile the flu and suicides, drug overdoses, and weekend shootings will triple the actual deaths from COVID.

Glad you enjoyed it, Steven. Appreciate the comment and you reading it!

I'm trying to make sense of this comment. Are you saying that each of those or all of those combined would 'triple' the Covid deaths? I mean, you're wrong regardless, just glancing at annual statistics for gun deaths, suicides, flu deaths, and drug overdose deaths, all of those groups TOGETHER would be between break even and a 1.5 increase on Covid's death toll in the last 3-4 months alone.

Which begets another question - if 4 statistics that most people consider moderate to serious problems only barely beat out 1 new problem, how is reaction to that new problem 'overblown'?

Or did you just imagine what the numbers were for those other groups rather than doing any research on what they actually were?

Considering it's going to be hard enough to get live sporting events off the ground, the concept that we could handle fans in the stands is foolhardy beyond belief.

I've felt all along that we need to prepare for sports to be TV shows well before they become events that fans can attend.

Hindsight being 20/20 (can't help but chuckle on that statement), the 2020 Calendar year would have been a great year to have gotten the Stadium renovations kicked into high gear.

NBA Basketball re-start will be interesting to see how it's handled (especially for Collegiate purposes). Basketball players are not going to be socially distancing themselves in the games. NHL pretty much same case (other than plastic shields probably could be attached to the helmets hockey players wear). College and NFL football, plastic shields can be affixed to the inside of the facemak cages. MLB, don't really need to worry about that (that's the most socially distancing sport in the United States).

MMA / UFC has been live now for a month plus, and they seem to be handling the social distancing measures really well (right?).

Before we ever worry about games or fans, the teams have to be able to practice. So far, even that is s commonly being shutdown. We’re talking about practice. (Cue AI. 🤪)

Spring seems more likely for FB to me.

The issue going forward is: 30% of the population will not get a vaccination. So what happens then? If masks work....let's wear them to a game.

Different for sure. But it would just be for one season and, I'll be honest, I think the novelty of it would be wildly interesting and entertaining.

Looking back, I'm very glad the NCAA Tournament was not played, but I was very much looking forward to seeing what the tourney in empty gyms looked and felt like. Would've been insane.

If they do play in empty houses, seems like it won't be that hard to hear most of the chatter, anyway. Just a few guys on the sidelines with those big dish mics that they use in football and you could pretty much get it all. Players don't need mics, maybe coaches...