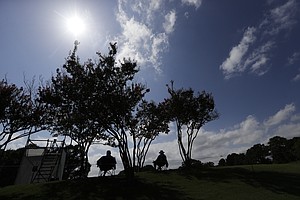 Scorekeepers wait for golfers on the seventh hole during the first round of the World Golf Championship-FedEx St. Jude Invitational Thursday, July 30, 2020, in Memphis, Tenn. (AP Photo/Mark Humphrey) by Matt Tait

Former University of Kansas golf standout Gary Woodland shot a 1-under par 69 at the St. Jude Invitational on Friday to move up three spots into a tie for 43rd.

After shooting a 1-over 71 on Thursday, Woodland is now even for the tournament.

Woodland made the turn on Friday at one under after carding three birdies and a pair of bogeys on the front nine.

Things got pretty vanilla from there, with Woodland parring seven consecutive holes on the back nine until bogeying No. 17.

That moved Woodland to even for the day and 1-over for the tournament, but the Topeka native got the stroke right back at the last hole of the day by draining a 13-foot birdie putt at No. 18.

Woodland is one of six golfers sitting at even par after two rounds at TPC Southwind. He’ll start Round 3 at 10:20 a.m. on Saturday and will open the day 10 strokes behind leader Brendon Todd, who shot 64-65 during the opening two rounds in Memphis.

Todd leads Rickie Fowler by two strokes and a trio of golfers tied for third by four strokes.

While Woodland will have to go low during the next two days to play himself into contention for this week’s PGA Championship tune-up, he sits just three strokes back of working his way into the Top 20 heading into Saturday.

In other golf news Friday....

• Former KU golfer Daniel Sutton moved to even par for the tournament with a 1-over 71 at the Pinnacle Bank Championship on the Korn Ferry Tour in Omaha, Neb.

Sutton, a native of England who played his final two years of college golf at KU, earned a Top 5 finish on the Korn Ferry Tour last week in Springfield, Mo.

He enters Saturday tied for 41st place, eight shots off the lead.

“It means a lot to me because this tournament is the biggest amateur tournament in the United States,” Tadokoro said. “I am just so excited to play and I am so grateful for this opportunity. There will be great competition with all the great players participating. I have been playing as many tournaments as I can during this time because I just want to keep myself in the game.”

Added KU coach Erin O'Neil: “We are very excited that Sera has been invited to compete in the U.S. Women’s Amateur. It’s a tremendous honor and opportunity for her to play against the best in the world, and to gain invaluable experience that will make her even better as a player.”