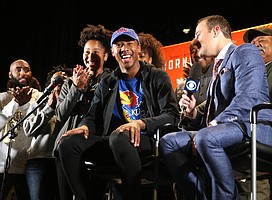 The game will be played April 1 in Houston.

One of 24 high school boys to earn a spot in this year’s McDonald’s game, the 6-foot-5 combo guard from Booker T. Washington High is the highest-ranked player in the 2020 class to sign with Kansas.

Ranked No. 19 overall in the 2020 class by Rivals.com, Thompson, who signed with KU back in November, is currently averaging 24.4 points and 5.7 rebounds per game this season, according to the Tulsa World.

He recently was named to the Bass Pro Tournament of Champions all-tournament team and also earned game MVP honors at the Norm Stewart Classic.

Said KU coach Bill Self of Thompson, shortly after the future Jayhawk signed his national letter of intent in November: “The signing of Bryce is one of our most important signees in recent memory. Landing at Top 20 player is a positive statement for our program on and off the court. … He’s a lead guard and scoring guard. We’ve had some of our best success with these type of combo guards. He’s going to bring energy to our program and he’s going to bring talent. We anticipate him being an impact player for us.”

Thompson becomes the 10th player from Oklahoma and fourth from Tulsa to earn a McDonald’s All-American Game roster spot and is the 46th Jayhawk to earn the honor.

Here’s a look at the rest of that list:

Interesting mixed bag of results on this list. From Nick Collison, Wayne Simien, Mario and Jacque to Preston, Diallo, Bragg and Grimes....