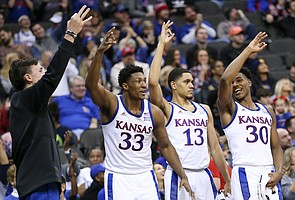 Normally, off days for the Kansas men’s basketball program mean a light workout, some film study and lots of rest.

But on Sunday, the third-ranked Jayhawks took the day off from basketball altogether. And replaced it with football.

During what normally would have been reserved for a little shoot-around after their 66-57 win at Texas on Saturday, the Jayhawks on Sunday tossed the football around instead.

KU coach Bill Self attributed the reason behind the unusual occurrence inside the KU practice gym to “Chiefs fever.” He also learned a few things about some of his players.

“I was pretty impressed,” Self said. “I thought (freshman point guard) Dajuan (Harris) showed some real capabilities as a quarterback and I think David (McCormack, or Chris Teahan) has the best arm on the team.”

The idea came from former KU forward Wayne Simien, who told Self that the Miami Heat did this from time to time around the Super Bowl during his playing days in the NBA.

The lighthearted football fun included three different throwing stations, where players competed with deep throws, accuracy and mobility, and some pick-up style routes that a even attracted a few of the KU coaches, including Self.

The biggest surprise for Self came from junior forward Silvio De Sousa, who not only fared well in the skills competition but also revealed to Self that he actually had played football before.

“Silvio, believe it or not, had the best hands,” Self said. “He said he actually practiced football at IMG (Academy) before and put pads on and everything. That was actually something that I didn’t know he had in him.”

Asked if De Sousa, who stands 6-foot-9, 245 pounds, had played tight end during his brief time on the gridiron at IMG, Self answered with a different position.

“He said he’s a wideout,” Self joked. “He may not know the difference between a tight end and a wideout, but I didn’t get into it with him and say, ‘Is that the one that lines up right next to the tackle?’ But, I mean, you look at that body, he probably could be quite a tight end.”

While the football outing proved to be a lot of fun and provided a lot of laughs, McCormack said the Jayhawks at first were a little worried about what was coming.

“I was definitely caught off guard,” he said while grinning from ear to ear. “None of us had a clue (that was coming). I wasn’t sure if it was a new form of boot camp or if we were just going to have a fun day. So it was definitely a pleasant surprise.”

As for who stood out to him, McCormack had no problem tooting his own horn.

“I would say I probably have the best arm on the team,” he boasted. “And I think a lot of people would say that, too. I definitely had to bring out my inner quarterback.”

Self said KU’s schedule, which includes Big Monday games during the next two weeks, made it so this week was their only opportunity to have a little football fun on their off day.

Here’s a look at some of the action.

Traded the 🏀 for a 🏈 at practice this afternoon.

Moss, a graduate transfer from Iowa, started KU’s road win at Oklahoma and led the team with 20 points on a career-high six 3-pointers.

He followed that up with 5 points and a career-high 5 rebounds in last weekend’s win at Texas.

For the season, Moss is averaging 8.1 points per game on 40% shooting from 3-point range. And his usage — 23.2 minutes per game — has been on a steady rise since the start of Big 12 play, with the sharpshooter playing 30 minutes or more in three of KU’s first five Big 12 games this season.

Junior guard Marcus Garrett’s hard fall in KU’s win over Texas turned out to be a shoulder injury and not a fall that affected anythingabove the neck.

“From what I heard, talking with (orthopedic surgeon) Jeff (Randall), it wasn’t a head (injury),” Self said Monday. “It sounded like it was a shoulder (injury). And what happened is, like many people do in football, he got a stinger and his arm went numb.”

Garrett left the game and went to the locker room but missed less than two minutes of game time and returned to the lineup to help lead KU to the win.

“We were fortunate with that,” Self said. “He’s fine.”