Bill Self on Big 12: 'League race isn’t over by any stretch' 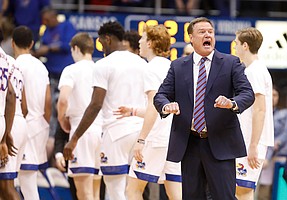 Kansas head coach Bill Self looks for a push off from a West Virginia player during the first half, Saturday, Jan. 4, 2020 at Allen Fieldhouse. by Nick Krug

With one game separating them in the loss column and the rest of the contenders saddled with at least four conference losses heading into the final seven or eight games of the regular season, the chase for the 2020 title appears to be down to Baylor and Kansas.

Makes sense, too, given the fact that both teams are ranked in the top three in the national polls and KenPom.com has both of them in the top four, with Kansas at No. 1 and Baylor at No. 4.

But even with the Big 12’s top two teams heading toward the home stretch with some serious separation between them and the rest of the conference, Kansas coach Bill Self believes it’s still too early to call it a two-team race.

“I don’t think we’re head and shoulders above everyone else,” Self said Monday. “Our records, give the appearance of that, but I don’t think there’s that much difference in the teams (at the top).”

Before you scoff at the Self’s suggestion that someone other than Baylor or Kansas could still win the Big 12 this season, consider that Self’s stance comes from experience.

“You’ve got what (seven) games to play and they’ve got a four-game lead on third place? That’s hard to come back from,” Self acknowledged. “But it has happened before. I think we were 10-0 my second year here in the league and ended up tying for the (title) at 12-4. So that kind of stuff can happen.”

Can is the key word there. And predicting it will is a much different ball game.

That’s partly because of the talent, depth and versatility with which the Bears and Jayhawks can play. But it’s also because of the lack of quality teams beyond the top four.

Some NCAA Tournament projections have had the Big 12 as a four-bid league, with KU, Baylor, West Virginia and Texas Tech being the only teams who currently appear to be in good standing with the selection committee.

The latest Bracketology update from ESPN.com’s Joe Lunardi has five Big 12 teams in the field of 68, with Oklahoma, as a 9 seed, joining the foursome listed above.

As Self pointed out this week, things could change and there are always “ebbs and flows” to any season. But with roughly a little more than weeks remaining between now and Selection Sunday, the teams at the middle of the pack are running out of time to build their resumes.

Even with that being the case, Self believes the bottom six or seven teams in the conference will have just as much say in how things play out as those types of teams do any year.

“I can see how people look at it saying it’s a two-team race,” he admitted. “But the other teams in our league will determine who the champion is still.”

Regardless of what happens below them, Self believes that Scott Drew’s Baylor team is in elite company.

“I think Baylor’s probably the best February 10th team that we’ve ever had in our league since I’ve been here,” Self said this week. “They’re better than (Texas) Tech was last year on February 10th. Oklahoma State would be the only other team I could compare them to and that was in 2004. Texas had a good run where they got out to a 10-0 start in league one year. But I think (Baylor) is the best team at this juncture.”

That OSU team went on to reach the Final Four. And that Texas team that Self mentioned actually ripped off 11 consecutive Big 12 wins to open the 2010-11 conference season before losing three of their next four games and finishing one game behind Kansas in the final Big 12 standings.

With just one head-to-head matchup with Baylor remaining on the schedule — Feb. 22 in Waco, Texas — Self is well aware of the fact that the Jayhawks are going to need a little help to get by Baylor and win the conference outright. And he also believes the Bears have put themselves in the best position possible through balanced offense and their stifling defense.

“The reality of it is, the league race isn’t over by any stretch,” Self said. “But Baylor is well in front of us, and well, well in front of everybody else. With us, we’re a game-and-a-half or two games out just because they’ve already won on our home court. … So I’m hopeful that somebody will play good against Baylor, including us, and give them something to really challenge them.”

Here’s a quick look at the remaining schedules for Baylor and Kansas:

Kansas needs a big win tonight. I don't see that the Baylor Bears are going to lay down and roll over.

KU's schedule down the stretch is much harder.

Road games at WVU ( hard place to win) , at KSU( since they have nothing to lose and it will basically be their super bowl, they will probably literally try to take some of our guys out)
at Baylor ---duh, tough game and at Texas Tech - they played us close in lawrence and we struggled mightily there last season.

KU has to basically run the table. It's not over. The most plausible choices for losses for Baylor are against KU and on the road at WVU. The oklahoma road game could be tricky for them, but I'm betting at worst baylor goes 5-2 down the stretch. Which means KU has to win the rematch and only lose one other game.

It can be done, but KU has got to lock in and keep the train rolling down the stretch.