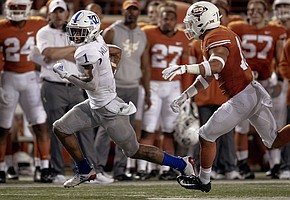 According to a series of online polls by Varsity Sports Now Louisiana, Kansas junior Pooka Williams Jr. is the greatest high school running back in Louisiana history.

A former four-star prospect in the class of 2018 who attended Hahnville High in Boutte, La., Williams won five rounds of voting during the recent 32-back bracket that played out on Twitter, Facebook and Instagram.

The former freshman All-American and 2019 first-team All-Big 12 back defeated Kenny Hilliard in the final round by winning 63% of the vote.

In the semifinals, Williams defeated current Jacksonville Jaguars running back Leonard Fournette by winning 61% of the vote.

Fournette, who was the nation’s consensus No. 1 overall recruit following his senior year at St. Augustine High in New Orleans, signed to play for current Kansas coach Les Miles at LSU and was the No. 4 overall pick in the 2017 NFL draft.

It’s hard to say exactly what led to Williams’ victory. Fournette’s numbers and resume were better across the board, as he rushed for 7,830 yards and 92 touchdowns during his prep career, topping Williams’ numbers of more than 6,000 yards and 72 touchdowns.

But Jim Derry, who works for both the New Orleans Times-Picayune and VSN Louisiana, had a couple of theories on why Williams won.

“Part of it is recency bias,” Derry said in a recent phone interview about the bracket. “He was the last truly great back in the state.”

In his more than 30 years of paying attention to Louisiana high school football, Derry said he never saw a more dynamic running back than Williams.

“He could catch passes out of the backfield, he could run the ball and he was phenomenal on special teams,” Derry said. “They didn’t kick to him. Because if they did, there was a good chance he was going to take it to the house.”

While the current Jayhawk’s flashy style and never-ending highlight reel of explosive plays likely endeared him to voters, Derry said Williams’ senior season was the stuff of legends.

“I don’t know if I’ve ever seen a senior year like he had,” Derry said. “And I definitely have never seen a playoff run like he had.”

That year, Williams ran for 3,128 yards and tallied 40 total touchdowns. In his senior-season push to the state title game, Williams ripped off 1,403 yards and 14 touchdowns in the five playoff games alone.

“Pooka was a pinball wizard,” Derry said. “He was just electric. You can probably find all 40 of those touchdowns on video somewhere, and 16 of them were just crazy.”

While Williams’ decision to leave Louisiana to come to Kansas had some in the state scratching their heads, Derry said his numbers and success at Kansas, through two seasons, illustrate that Williams made a wise decision.

“They can’t all go to LSU,” said Derry, noting that recent first-round NFL draft pick Clyde Edwards-Helaire, a native of Baton Rouge, La., and Williams would have been at LSU at the same time had Williams elected to stay home.

“And I think Pooka’s better than Clyde,” Derry said. “He might not be quite as powerful, but in pretty much every other way, I think he’s a better back.”

For what it’s worth, Edwards-Helaire didn’t even make the VSN bracket.

Here’s a look at a few of the other notable names who did, many of whom played in the NFL and/or starred in college.

• Marshall Faulk – Known today as one of the most dynamic NFL backs of all time, Faulk was not quite on that level during his high school days. Remember, the New Orleans native played his college ball at San Diego State and not Alabama, LSU or USC. Faulk was a 5 seed and he lost to No. 1 seed Cecil Collins, who ran for 99 touchdowns and 7,800 yards during his prep career, in the round of 16.

• Brandon Jacobs – The bruising back who made a name for himself by scoring 60 touchdowns during an eight-year NFL career with the New York Giants was a No. 3 seed and rumbled his way to the Final Four of the bracket, where he lost to Hilliard.

• Kevin Faulk – One of four No. 1 seeds in the bracket, the longtime New England Patriots multipurpose back and former LSU star lost to No. 2 seed Kenny Hilliard in the quarterfinals.

• Dalton Hilliard – The former New Orleans Saints standout was a No. 2 seed and lost to Fournette in the quarterfinals.

• Joe McKnight – The former USC running back who played professionally with the New York Jets before dying in a car accident in 2016, was the No. 3 seed in Fournette’s region and lost to current Washington Redskins back Derrius Guice, who also attended LSU and hails from Baton Rouge.

• Travis Etienne – The 4 seed in the Fournette region, Etienne is headed back to Clemson for his senior season, where he will look to lead the Tigers to another national title and break a few school, conference and NCAA records in the process. According to Fanduel.com, Etienne enters the 2020 season with the highest odds of any running back in the country to bring home the Heisman Trophy. He is Fanduel’s sixth overall favorite to win college football’s most prestigious individual prize.

• Leroy Hoard – Another 3 seed, who fell to Kenny Hilliard in the second round, Hoard, a native of New Orleans, played nine seasons in the NFL, the first six in Cleveland and the final three in Minnesota.

• Travis Minor - A standout at Florida State after his prep career, Minor went on to play eight seasons in the NFL with the Miami Dolphins and St. Louis Rams.

We're down to the Championship in our Greatest High School Running Back in Louisiana History bracket.
Semifinal Results with total votes from Twitter poll, Facebook, and Instagram:

Why in the heck did he come to Kansas? I'm glad he did but wow! His game hasn't transitioned yet to College Football. I hope this year (if there is a year) he takes off and show the world what he is made of.

I think his game has transitioned just fine, but the problem is that he hasn't had the combination of great coaching, a great line, and at least a good QB. I think the coaching is there now, so if the line can come together and a good QB can emerge, the sky's the limit.

I am pretty sure Tony Hull brought him when he didn't get primary attention from LSU. Tony made sure he was given the opportunity to start as a Freshman. Hard to believe with those numbers he was ranked 4 star and not 5. If he had signed early with someone like Nebraska....the services probably would have rasied his ranking,,,similar to how players commiting to KU Basketball early have their rankings go up after the fact. Recruiting services take notice that Bill Self takes notice. IMO, Pooka slipped under the radar. <br><br>

About the line: KU is a little more than half of the way there on the line. We have 3 seasons of 3 Star recruits that are not transfers in the same system for two years. Once we get to 4 years of HS recruits with 4 years in the same system, with the experienced Upper classmen being mentors, it becomes all about conditioning and execution.