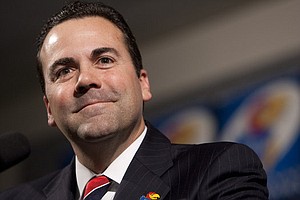 Former KU athletic director Sheahon Zenger, who spent the past year in a combined academic and athletic role at TCU, is back in the AD's office.

Zenger on Thursday morning was officially introduced as the new AD at the University of New Haven in West Haven, Conn., roughly 15 months after being fired at KU following a seven-year stint in charge of Kansas Athletics.

Zenger, officially the school's director of athletics and recreation, joined New Haven on Sept. 1 and will be charged with directing the school's early exploration of a potential move to the Division I level.

“We are thrilled to bring Sheahon’s broad background and talent to the University of New Haven and look forward to his vision and leadership of our athletics program,” said New Haven President Steven Kaplan in a news release. “He brings a unique combination of strengths and experience that are aligned with our ambitious vision to ensure that our student-athletes compete at the highest level on and off the field.

“I am confident that Sheahon will take our already successful athletics program to an even higher level. I look forward to the many important contributions he will undoubtedly make.”

Said Zenger of his new opportunity: “President Kaplan’s growth of the university’s programs, facilities, and endowment during his tenure has been nothing short of phenomenal. And his excitement about expanding the university’s athletic footprint and reputation is exceptional. I am very pleased to be joining this remarkable community and can’t wait to begin contributing to the university’s success.”

According to the release, the University of New Haven is a private, coeducational university that was founded on the Yale campus in 1920.

Over the past 15 years, under the leadership of Kaplan, the university has experienced significant growth in both enrollment and the expansion of the university’s West Haven campus. Enrollment has increased by 60% to more than 7,000 undergraduate and graduate students.

Looking forward to him giving Billy Gillespie a 15-year contract to coach basketball.

It would be easier to wish him well if he hadn’t stuck us with the Beaty extension as a way to try and save his job.