If this is the end, Khalil Herbert's Kansas career closes with a sour taste 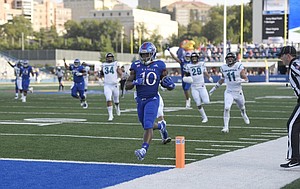 Kansas running back Khalil Herbert runs into the end zone for a 41-yard touchdown against Coastal Carolina Saturday night at David Booth Kansas Memorial Stadium on Sept. 7, 2019. by Mike Gunnoe

This new college football rule about playing four games and still being able to redshirt — now in its second year of existence — is great for the players when used properly.

And it’s an absolute disaster when it’s not.

Although there has been no official word from the University of Kansas or senior running back Khalil Herbert, that certainly appears to be what’s happening with the 2-3 Jayhawks right now.

After rumbling to 384 yards in four games and averaging 8.9 yards per carry, Herbert said thanks but no thanks to his team less than 24 hours before kickoff in Week 5.

The move preserved Herbert’s ability to redshirt the 2019 season, leaving open the potential for him to play in 2020 as a graduate transfer with a different program.

It also drew the ire of a few notable former Jayhawks and left his current teammates hanging heading into a 51-14 loss at TCU last Saturday.

I’m not in the business of calling out kids for decisions they make about their personal lives.

But it’s hard not to look at what’s happening with Herbert and not be at least a little bit disappointed.

If Herbert is, in fact, headed toward redshirting the rest of the 2019 season, that’s an incredibly bad look for a player who has been nothing but team-first and great to be around throughout his KU career.

For proof of that, look no further than the support he has received on social media from a handful of the teammates he appears to be suddenly saying goodbye to.

Truth be told, those posts, from players like Kyle Mayberry, Codey Cole III and others, are more of a nod to their maturity and team-first mentalities than anything else.

What Herbert is doing is baffling.

Even if it is the right thing for him personally — debatable — and even if his teammates are OK with it — I’m not sure they all are — you just don’t see something like this happen very often.

Taking away a team's leading rusher and most experienced offensive skill player is no small blow.

Beyond that, it's just not something you'd expect from someone who has been so all-in on supporting the rebuilding and grinding that it takes to be a Kansas football player with his head held high in the current climate.

As recently as Sept. 20, one day before what looks like it will go down as Herbert's last game as a Jayhawk, he was on Twitter, urging fans to #PackTheBooth and come out and support his team.

Herbert’s a senior. He served as a captain for that West Virginia game and twice has been asked to represent the program at Big 12 Media Days in Dallas.

He’s KU’s leading rusher and enters Week 6 as the fourth-leading rusher in the Big 12. In many very positive ways, he also has been the face of this program for the past couple of years.

KU head coach Les Miles said Monday that the full story would eventually come out and, in no uncertain terms, Miles made it clear that he spent his fair share of time trying to talk Herbert into staying.

Former KU captain Ben Heeney, who was as bleed-crimson-and-blue as they come while winning just nine games during his four-year Kansas career, was not as understanding.

“Quitting on your team minutes before kickoff with the intent to redshirt and transfer is a losers mentality anyways let the kid transfer," Heeney tweeted on Sunday. "I don’t wanna hear all that ‘kid is doing what’s best for him.’”

When the rule change was announced in August 2018 — before then, appearing in even a single game eliminated a player’s redshirt options — the belief among players and coaches was that the new system would be best for freshmen and would allow them to get four games of valuable experience and development without costing them an entire year of their precious eligibility.

This is not that.

Herbert very well could go on to enjoy a strong 2020 season, priming him for a shot at the NFL and giving him a chance to win a few more games than he’s been accustomed to in college. There are still many people in and around Lawrence hoping he does just that.

And it’s hard to blame him for wanting either of those things. But there’s a right and a wrong way to go about getting them.

And quitting on your team midseason does not fall in the “right way” column. That’s a lesson many of us learned as far back as kindergarten, when you first started playing T-ball or youth soccer and wanted to quit when the ball didn’t bounce your way.

You and I didn’t get to then (thanks, Mom and Dad), and it’s hard to give Herbert a pass for doing it now.

I can't believe how down I am about Herbert maybe leaving us. I sincerely hope that's not his plan and that whatever his "personal reasons" he soon gets them taken care of. Just as I was thinking this team is making progress, we get blind-sided with this. It hurts. It really hurts. I hope we all are wrong and he'll be back soon.

What about Dom Williams? Did not play the last game. Sounds like he may be doing the same thing! Are there others who maybe did not play because of "injury" but in fact planning to enter the portal?

Bye, dont let the door hit you on the way out. Guy could have been special but has no heart.

Hope he never plays a down in the Pros.

Not sure how going to another program is going to help but if he wants another year of eligibility, red shirt this season and come back next year in a KU uniform.

We’ve all made decisions that we’ve regretted at some point no matter how big or small. Some maybe even considered “not the right thing to do” category. I can respect the young man’s decision without having to agree with it. I certainly don’t wish him any ill will or lack of success in the future in whatever he does. If he needs to move on, then move on. The team will carry on and persevere with or without him. For those staying and willing to see the rebuild through....ROCK CHALK!!

Heeney is right on target!

shout out to Ben Heeney!