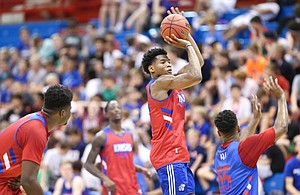 Kansas guard Ochai Agbaji pulls up for a jumper during a scrimmage on Tuesday, June 11, 2019 at Allen Fieldhouse. by Nick Krug

There won’t be any sneaking up on anybody this season for Kansas sophomore Ochai Agbaji.

Whether you’re talking about in the minds of his own team — and head coach — or Big 12 opponents, Agbaji’s talent and potential are now well known throughout Big 12 country and many are expecting a big jump for the 6-foot-5 guard from Kansas City, Mo.

The reasoning behind that expectation is sound and supported by a lot of logic.

For one, Agbaji has seen it. He knows what it takes to play and compete at this level and that should make him even more confident, prepared and ready to take on Year 2.

For two, most players — especially key, rotation guys — make a pretty significant jump from their freshman to sophomore seasons.

And beyond that, Agbaji entered last season expecting to redshirt and wound up playing. Imagine what he can do with an entire offseason of getting his mind ready not only to play but likely to start and have a key role on a Top 5 team.

The possibilities are endless and you know Agbaji has put in the work and will not cheat the game for one second during his second year as a Jayhawk. It should be fun to watch.

Here’s a closer look at why.

He Will: Be the best on-court leader on the roster

Nothing stood out to me about Agbaji’s strong freshman season more than his ability to step right in — to a tough situation — and function as one of the team’s top on-court leaders.

Even as a true freshman who had been underrated and planned to redshirt in Year 1, Agbaji found his voice on the floor and did not care who he was talking to or why. If he saw something was off, he’d say something. If he didn’t like the way a teammate did (or didn’t do) something, he’d go tell him and get in his face if he had to.

All of this, of course, came with great respect, as Agbaji never overstepped and always treated his teammates, coaches, opponents and the game the way he expects to be treated.

That’s natural leadership. Either you have it or you don’t. And Agbaji has it in bunches. I expect it to shine through even brighter this season and to serve this new-look Kansas team even better than it did a season ago.

He knows he’s a key piece of this team and that, in many ways, this is his team as much as anyone else’s. That knowledge, when possessed by a natural leader like Agbaji, can do wonders for a team, the individual players and the season as a whole.

This isn’t so much a comment about Agbaji as it is embracing reality. As long as everyone stays healthy, I fully expect Jayhawks Udoka Azubuike and Devon Dotson to be first team all-Big 12 performers and to both be in the mix for Big 12 player of the year.

It’s awfully hard to put a third Jayhawk on that five-man team, no matter what type of year Agbaji has.

Don’t get me wrong, if he averages 20 a game and is among the conference leaders in rebounds and 3-point shooting, he’ll almost certainly be a first-team guy. But doing that on this team will be tough. And I think it goes without saying that Azubuike and Dotson have a leg up on Agbaji (and others) in their pursuit of that first-team designation, simply because so much of what KU does this year will run through them.

In the 23-year history of the Big 12, KU has had 119 players earn all-conference honors. Agbaji no doubt will do his part in adding to that number this year, it’s just more likely that he’ll finish as a second-team pick than among the league’s first five.

The opportunity is there for the taking and it’s doubtful that any player on the roster put in more time working on his jumper this offseason.

From retooling his technique to watching film, tweaking his fundamentals and seeking the advice of a couple of different coaches, Agbaji did everything he could possibly do to become an even better 3-point shooter for the Jayhawks.

Leading the team — whether by makes or percentage — will be one heck of an achievement.

Grad transfer Isaiah Moss is expected to be this team’s best 3-point threat by percentage and he might just play enough to lead the team in makes, too. Beyond that, newcomers, Mackey McBride, Jalen Wilson and Christian Braun all can shoot it and then there’s sophomore point guard Devon Dotson, who knows that his path to the NBA will be much more direct if he can become a better shooter. As a result, Dotson put the time in, as well.

The question all offseason has been whether this team has enough shooting. If Agbaji, who shot .307 from distance a season ago (23-of-75 in 22 games) can push that percentage closer to 40 than 30 and double his makes, that will go a long way toward answering that question.

Either way, it definitely would go a long way toward positioning Agbaji as one of the Jayhawks' best shooters, a title he has worked for this offseason.

Isiah Moss looks to be a big add. If Moss shoots the 3 as advertised it will make it very hard for other teams to just try and outscore KU from the outside. Usually the 3pt shooting percentage goes up from Freshman to Senior. I HOPE but don't really expect Agbaji to put up shots as efficiently as Moss in his Sophomore year.<br>
I expect we play 10, the lineup to be:<br>
Dok - MacDonald - Silvio @ 4 and 5 spots<br>
Wilson - Enaruna - This could go either way at the 3.<br>
Agbaji - Moss - Braun, the 2<br>
Dotson - Garrett at point guard.<br>
At times we could go small and have just Dok surrounded by guards.
Unless someone gets hurt McBride red shirts an maybe Lightfoot as well.<br><br>
Lightfoot could get significant time in 2020-2021 alongside Mac and I am sure they could help a couple of young incoming freshman develop.

I'm waiting for your story on McCormack. Is it possible he might overshadow Udoka? I'm thinking if he get the chance to shine with effort he will be a major success. Unless Udoka becomes a better shooter simply dunking won't happen.I might be wrong but food for thought.

I agree, Mac is better offensively. But with Silvio inside my guess is much more offense won't be necessary. Dok will be slamming and adding 10 per game every night and his huge presence, blocks, and defense will be what's needed. Now, if Mac proves to be better defensively then Dok could be coming off the bench.<br><br>

Ochai and Devon reminds me of Devonte and Frank 3 years ago. It was Frank’s team, but Devonte was the voice. The reason Ochai could be outspoken is all about him coming alongside and being positive even in corrections. Others last year were either too quiet or too negative. Really looking forward to the season.