Class of 2022 small forward and Kansas commitment, Tre White, received a visit from KU assistant coach Jerrance Howard on Tuesday, one day after the program received a highly public notice of allegations from the NCAA.

White, who currently is the lone prospect committed to KU in future classes, posted a photo of Howard’s visit to his Instagram account with the caption “Family showing love,” written below a picture of White and Howard in the gym.

Reached by the Journal-World on Tuesday night, White said the visit from Howard “meant a lot” and he added that he was still solidly committed to Kansas.

“I tried not to listen to everything,” White told the Journal-World of the reaction to Monday’s news. “But it’s all good, man. I love Kansas. It’s a dream. My relationship with the coaches is crazy. It really is a family. I said family on Instagram, but it really is family. I don’t know how to explain it, but I knew everything was all right.”

White, who recently jumped into the No. 10 slot in the updated 247 Sports rankings for the Class of 2022, also revealed Tuesday night that he had made plans to make an unofficial visit to KU for Late Night in the Phog next Friday.

One reason for his desire to see KU’s season tip-off extravaganza in person is the recommendation of a former high school teammate who nearly came to KU himself.

“R.J. Hampton’s like a big brother to me,” said White of the former five-star prospect who chose a pro contract in New Zealand over Kansas and college earlier this year. “He texts me every day, making sure I’m in the gym and eating right, and he said I’ve got to go to that if I ever get the chance. He said that about a year ago and it’s finally right around the corner.”

With recruiting still in a live period, White said his team’s preseason conditioning sessions were drawing about five college coaches per day to watch the various prospects on White’s Cornerstone High squad in San Antonio. He also said none of the coaches had really spoken to him.

The young and still-growing forward, who said he recently measured 6-foot-6, 200 pounds and also is a straight-A student, said he had started to realized more and more in the months since his commitment in June just how big his commitment to KU was to others. 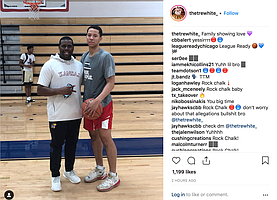 Tre White and Jerrance Howard via Instagram. by Matt Tait

"the lone prospect committed to KU in future classes"... What? 2020 is not considered a "future class?"

Perhaps you're mistaken about something?

Also, for what it's worth, I consider the 2020 class to be the "current class" since the 2019 class is already signed and on campus and some of those 2020 commitments will be signing in less than two months.

I love that he's not only a top-ten prospect but a straight-A student. Sounds like a great get if he sticks with his oral commitment.

“Future” sounds like the “next Friday” discussion in Mom’s Night Out.

It will be interesting to see this 6-6 200 sophomore mature. It’s also nice to hear Hampton recruiting for us even when he chose not to attend. Definitely more mature than some of the responses following his decision.