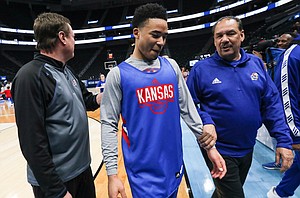 It has yet to arrive in Kansas and might never get here, but if it does KU basketball coach Bill Self believes wild times are ahead for college athletics.

Self for the first time on Wednesday morning publicly shared his thoughts about the new law passed in California that allows college athletes to make money off of their likeness and endorsement deals while still in school.

“It’s wild,” Self said Wednesday on a radio appearance on 610 Sports in Kansas City. “I mean, you’ll have student-athletes doing every barbecue commercial, every dry cleaning commercial, car commercials. You’ll have them doing all this stuff in a way to generate money, which I’m not saying is wrong in theory, I just think it’s going to be the wild, wild west in a way that we’ve never seen before.”

Although there is nothing imminent that suggests such a law is coming to Kansas, the California law, signed by the governor earlier this week and set to go into effect in 2023, has kickstarted the conversation about California’s move could mean for college athletics in general.

One of the most attention-grabbing aspects of the new California law — a Congressman in Ohio recently announced plans to propose a federal law along the same lines — is the potential recruiting advantage it could provide universities and programs in states that follow California’s lead.

KU football coach Les Miles said earlier this week that schools in markets like New York City and Southern California would have more to offer student-athletes from an endorsement perspective. But Miles seemed unfazed by any perceived advantages this might give California and other states that elect to adopt the new rules.