Sizing up Kansas' Devon Dotson vs. Udoka Azubuike for Big 12 Player of the Year 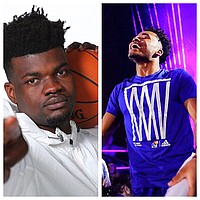 KU's Udoka Azubuike, left, and Devon Dotson are two of the top candidates for 2019-20 Big 12 Player of the Year. by Matt Tait

It happens, but it’s rare to see two players on the same team who are worthy of conference player of the year consideration.

That’s the case with the Kansas men’s basketball team this season, and both Udoka Azubuike and Devon Dotson landed on the Big 12 Conference’s preseason first team, voted on by the coaches and released Wednesday morning.

Azubuike, the senior center from Nigeria, edged out Dotson in the player of the year voting and the whole thing got me thinking about which player was more likely to win it.

Each has a great opportunity and is sitting in the perfect position. At this point it’s just about who has the better season over the next several months.

With that in mind, let’s take a quick look at the case for both Jayhawks.

If you’re one who believes in things being due to happen, you’re probably in the camp that thinks Azubuike will have an injury free 2019-20 season. After suffering significant injuries in each of his first three seasons as a Jayhawk, Azubuike enters his senior season in the best shape of his life and hungry to show both what he can do on the floor and that he can stay there.

He is arguably the toughest individual match-up in all of college basketball, who shoots everything in the paint at a ridiculously high percentage and uses his size and strength to create easy scoring opportunities and dunks at a high clip.

What’s more, even when he’s not posting up one-on-one against a defender, Azubuike is a monster threat around the rim because of KU’s system that encourages the guards to drive into the paint and throw lobs his way when the help comes.

Two years ago he shot 77% from the floor, setting a KU record and finishing with the second highest mark in NCAA history. And during the past two seasons it was incredibly obvious that the Jayhawks were a much more dangerous team when Azubuike was on the floor.

Add to that the new physique and better conditioning and the fact that, with added depth in the front court, foul trouble and fatigue should not be the factors they once were and it’s easy to see how Azubuike is not only the favorite to be the Big 12 Player of the Year, but also a likely All-American candidate.

In my opinion, he could almost lock this thing up if he can just shoot 50-60 percent from the free throw line.

The case against Azubuike

If there’s one thing working against him in this argument it’s the fact that Azubuike is almost entirely reliant on others to help him get his numbers.

He’s never going to create his own shot, can’t shoot reliably from outside of five or six feet and will see plenty of double and triple teams throughout the season.

Beyond that, with KU’s 3-point shooting being a bit of a question mark entering the season, there’s no doubt that opposing coaches are going to do whatever they have to do to force Azubuike to give the ball up when he gets it, taking away opportunities in the paint and daring the Jayhawks to beat them from the outside.

If that works — and, again, this is where Azubuike’s reliance on KU’s guards to get him good touches is so key — then Azubuike’s numbers will suffer as a result.

Two years ago, when he played in 36 of 39 games to help Kansas reach the Final Four, Azubuike averaged 13 points and 7 rebounds per game. And for his career, he owns averages of 11.5 points and 6.4 rebounds.

I’ve always thought his rebound totals should be higher and that would be one place where Azubuike could all but guarantee himself this honor by season’s end.

Sure, staying healthy is crucial, but assuming he does, if he can get to the point of averaging double-digit rebounds to go along what is almost a lock of him reaching double digits in scoring each night, a strong double-double average on the best team in the conference would be tough to vote against when March rolls around.

We saw it last season, when he started all 36 games as a true freshman, playing one of the toughest positions in college athletics for one of the most demanding coaches. And Dotson never blinked. He got better as the season went on, still had plenty left in the tank at the end despite the high usage rate and is such a competitor that he rarely had time to even think about whether he was tired.

Again, that was as a true freshman. And the crazy thing about Dotson’s game entering Year 2 is that he only has gotten better in pretty much every aspect.

Bigger, stronger, more confident and, yes, even faster, Dotson will be able to do things this season that his rookie status kept him from doing a season ago.

His improved outside shot is probably the biggest key to his POY candidacy, but even if he doesn’t shoot it a ton from the outside this season, he’s still a virtual lock for double digits a nightly basis because of his ability to get to the rim in transition, through traffic, on broken plays, you name it.

One of the things NBA scouts wanted to see from Dotson was a better glimpse of his ability as a true point guard. So while attack mode has been his thing throughout his life, his ability to look for others and run the show could actually help him out in terms of his numbers.

Frank Mason III won Big 12 Player of the Year with a historic season in 2016-17 – 21 points, 5 assists and 4 rebounds per game while playing 36 minutes a night over 36 games won him the honor. A year later, Devonte’ Graham won the award with a stat line of 17 points, 7 assists and 4 rebound a game.

So it’s obvious that Dotson is playing the right position on the right team to get it done. He just has to get those assist numbers up and make sure he hits the glass. If he does and his numbers are even in the 15-5-5 range, he could be awfully hard to vote against.

The case against Dotson

First of all, the presence of Azubuike is going to make it tough. Not only was he the coaches’ pick for Preseason Player of the Year, but he’s also the most visibly noticeable player on just about any roster in college basketball and also will be the focal point for opposing coaches going into every game.

What’s that mean? Well, generally speaking, unless teams just shut him down (not likely), there are going to be a lot of coaches who look at his line after losses to Kansas and don’t have to look anywhere else to see why they lost.

That’s the challenge thrown Dotson’s way. Not only does he have to put up big numbers to be in the conversation for POY at the end of the season, but he likely has to outdo Dok, which could be difficult.

That’s especially the case because of the fact that so much of what Dotson will be asked to do this season will be to help Azubuike get his.

Beyond the Udoka Factor, Dotson also is facing a situation where KU’s stacked roster will help carry some of the load.

Mason had Graham but he still had to be great every night for KU to win. Graham had weapons around him but did not have another player on the roster capable of running the show at the same level.

That helped both players put up numbers and get recognition.

And while Dotson’s not going to be overlooked by anyone Kansas plays, the fact that the Jayhawks could put up some big numbers across the board and rack up some easy victories along the way might keep Dotson’s season from standing out.

As for his own individual contributions, the biggest thing Dotson can do to help himself in the Player of the Year race is to become a legitimate 3-point threat. If he is, his numbers could be good enough and his impact so obvious that people won’t be able to overlook it.

He shot it well when he was open last year and he put in a ton of work this offseason to create shots off the bounce. The shot has looked good so far. Let’s see if that carries into the season.

Opinions are not facts. So guess what because Udoka blocks the driving lanes hard for Dotson to do that.Unless he Udoka gets shots to make more than a few feet from the goal and makes them he'll get many free throws. Dotson is my choice as he will determine what offense works.

What happened when Sherron and Cole were co-preseason? A bit ironic that it’s another KU PG-C combo.

I don't know why some guys think Dotson needs to put up high scoring to be POY. This is basketball. A great PG doesn't need to do lots of scoring. A great PG makes everybody in the team better by putting up high assist #s.
Dotson & Dok can complement each other nicely. They don't have to compete for POY through scoring. A great coach will be able to find a way so the two can work together - setting aside POY stuff.

Let's hope this season to be another most memorable season for KU under coach BS.
ROCK CHALK!!!