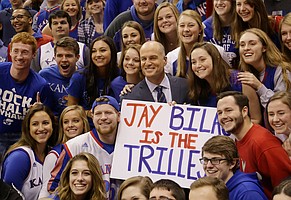 ESPN College GameDay analyst Jay Bilas is photographed with Kansas fans during the show at Allen Fieldhouse, Saturday, Jan. 30, 2016, hours before the tip-off between KU and Kentucky men's basketball game. by Mike Yoder

Despite the looming cloud of NCAA allegations, the elite status of Kansas basketball is safe, according to ESPN analyst Jay Bilas.

Speaking on Rock Chalk Sports Talk with Nick Schwerdt on Monday afternoon, Bilas discussed KU’s current battle with the NCAA over allegations of recruiting improprieties and put forth the idea that even though KU may have a tough time defending its case in the months ahead, the next year will not hurt the KU brand in the big picture.

“Kansas basketball is in no jeopardy whatsoever,” Bilas told Schwerdt. “This is a short-term issue. It may be very painful in the short term, but (in) the long term I don't think there's any real concern."

Bilas said he was not surprised by how strong the NCAA’s case against KU read and added that the whole thing will come down to the simple matter of whether the newly formed Independent Resolution Panel, which will hear and ultimately rule in the case, believes KU’s defense.

“You can argue it both sides, it’s just going to depend on what the decision makers think that are in that room,” Bilas said. “Independent or not, these folks were brought in by the NCAA. This is not what I would advocate, which is take these cases to the American Arbitration Association, where you’ve got complete independence. I don’t think if you’re being paid by the NCAA you’re independent. But at least it’s better than it used to be, so I would expect a fairer shake than (KU) could have gotten. If this were the old system, I would not have given Kansas, or anybody else that was caught up in this FBI thing, much of a chance at all.”

Just after the 1-hour mark in the clip below Bilas discusses KU’s potential legal action after the ruling comes out sometime next year.

Bilas spoke for about 20 minutes total — from the 43-minute mark through 1:04 — and also weighed in on this week’s new law in California that allows college athletes in the state to be compensated for their likeness through endorsement deals and other means.

While the new law, signed by the California governor on Monday, does not go into effect until 2023, Bilas believes that it marks the beginning of some major changes forthcoming for the NCAA.

“This is probably the tipping point, if you will, of action,” he said. “They’re going to have to do something here. This is over. Everybody knows this. This is not amateur sports. This is professional sports. And they’re just calling it amateur. Amateur sports doesn’t make billions of dollars.”

Here is Monday's entire RCST podcast, with Bilas talking for 21 minutes from :43 through 1:04.

I read that Kansas lawmakers doubt they'll pass similar legislation to what California enacted. Wouldn't this put California schools at an advantage in drawing high level recruits? After all, if you were a 5-star recruit, are you going to a school where you can sign a multi-million dollar endorsement deal or are you going where you cannot?

My guess is the NCAA just forms some kind of new league and it's no longer considered Amateur. "Professional Collegiate Basketball Association" would be my guess...and most schools won't be able to pay to play. <br><br>

This California rule is going to ruin college sports if it is allowed to stand. When everyone hears the word "endorsements" you think Nike, Adidas, Under Armor, etc. But what you will really get is the local car dealership and every other booster owned business throwing money in. Players will simply go to the highest bidders-- a complete and unmitigated disaster will follow. They'd be better off giving them some sort of regulated stipend that is consistent across all universities or better yet, leaving it alone.

Has the FBI investigation/scandal not taught you anything? All of this already happens under the table.

Your naive world must be fun to live in.

Totally disagree. It may actually save collegiate sports.