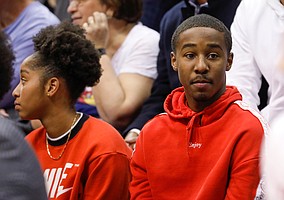 Kansas recruit Bryce Thompson watches from behind the Kansas bench during the second half, Friday, Nov. 8, 2019 at Allen Fieldhouse. by Nick Krug

When it comes to recruiting in college basketball, big days come nearly as fast as they go.

And the biggest day of the 2020 recruiting cycle has arrived for the Kansas men’s basketball program.

At 10 a.m. Tuesday, during a ceremony at Booker T. Washington High in Tulsa, five-star guard Bryce Thompson will announce his college decision in front of friends and family members.

The announcement will be streamed live by CBS Sports HQ.

And there’s no doubt that it will be the biggest decision day ceremony — good or bad — that the Jayhawks encounter in this recruiting class.

With a pair of quality four-star prospects already on board in big man Gethro Muscadin and juco wing Tyon Grant-Foster, Kansas is in position to build a monster class if Thompson chooses the Jayhawks.

According to 247Sports, those two players make up the 50th-ranked recruiting class in the 2020 rankings to date. Adding Thompson would send that trio skyrocketing into the No. 11 position in the current rankings, according to the 247Sports Class Calculator, which measures the impact of adding a particular prospect to any class.

But Kansas has had Top 10 classes before and probably will again in the future, with or without Thompson picking KU on Tuesday. But this commitment, if the Jayhawks were to land Thompson, would be a huge victory and mean a lot more than just plugging in a future spot in the lineup with a quality prospect.

Adding Thompson, in the midst of all of the uncertainty surrounding the program with the FBI trial and recent notice of allegations sent from the NCAA, would be a sign that the KU brand still resonates with top-tier recruits.

That fact would open the door for more elite players to follow Thompson in the near future, with Thompson serving as the steadying force that tells the rest of the recruiting world that things are OK at Kansas.

Whether they are or not, of course, remains to be seen, but KU coach Bill Self and his staff have said they have been very open and transparent with all of their current targets and their families about the current situation. And landing Thompson would be the biggest indicator yet that those assurances are working.

I asked Muscadin and Grant-Foster about the allegations and whether they were concerned about the future of the program and both players said they trusted what the coaches had told them and were not at all worried about KU’s future.

Self has said that the allegations have impacted KU’s recruiting efforts, adding that, at least for the time being, he and his coaching staff would have to “grind a little bit and maybe work a little smarter and target a little differently and things like that.”

Landing Thompson would change that.

Thompson, the No. 19-ranked player in the 2020 class in both the 247Sports Composite rankings and by Rivals.com, was in Lawrence on Friday night for one final unofficial visit to Kansas. He sat behind the bench with his family for the Jayhawks’ 74-62 victory over UNC Greensboro and got one last look — or is it feel? — at Allen Fieldhouse on a game night.

Self and OSU coach Mike Boynton also were expected to be in Tulsa on Sunday afternoon for one final visit to the Thompson home.

The 6-foot-5, 175-pound combo guard is down to a final four of Kansas, Oklahoma, Oklahoma State and North Carolina, and many believe it’s a three-horse race with the Tar Heels on the outside looking in.

His Crystal Ball prediction on 247Sports sits in KU’s favor, with the Jayhawks receiving 82% of the votes and Oklahoma getting the remaining 18%. And the Rivals.com FutureCast features all 10 recruiting analysts projecting Thompson to KU.

That includes two picks that were changed from OU to KU in the past three weeks and three more picks for Kansas that were put in during the past week.

While that certainly creates a situation that looks good for Kansas, those projections are far from iron-clad indicators of a prospect’s decision.

In announcing his final four in an interview with Eric Bailey of the Tulsa World, Thompson had this to say about KU:

“Kansas is a great school. I had a great visit with a lot of players. Coach Self is a great guy. Coach Norm (Roberts) and all of the other assistants have done a great job recruiting me and making sure that I know that it is a home away from home. My dad and Coach Self have a great relationship, as well as Coach Norm. They were here at the University of Tulsa, so that was obviously a big plus. They’ve also been there for a long time. It’s a great school with great tradition.”

That connection between Self and Thompson’s father, Rod, who played for Self at Tulsa, has always been a big part of this recruitment.

And although it might not be the deciding factor, one way or another, there’s little doubt that if Thompson picks KU, his father’s relationship with the Kansas staff will have played some kind of role.

“This has been a family decision,” Thompson’s mother, Goldie, recently told Bill Haisten of the Tulsa World. “Because Rod and I were college athletes, we were able to provide some insight.”

The lists of pros and cons are written. The pitches have been made. And the visits and hours, days and weeks of information and contact have now subsided.

The only thing left is for Thompson to make his decision known. No matter which school he picks, Tuesday will be a monster day for that program, even if it is for slightly different reasons at all four places.

Who do you suggest we fire?

Does it matter? Would take Danny in a heartbeat.

sounds like we have a great shot at this kid. awesome!

Jerry - Danny returning wouldn’t require anybody to be fired now any more than it did the first time he came onboard a decade+ ago. Or anymore than the multitude of times others have come onboard. He doesn’t have to be a teaching/recruiting coach to be onboard. Lots and lots of other positions possible. Coach Self has a habit of being a soft landing for ex-coaches he likes and values the knowledge they are able to contribute.

---Devonte’ Graham has shown signs of lightning quick development thus far, and could be a very important piece to this Charlotte Hornets rebuild moving forward, whether he is starting or coming off the bench.----ZP

Who doesn't get excited watching 'Tae in the league now? Hopefully, these 4-stars, 5-stars guards will look at KU seriously. There are times I don't like coach BS strategies, but trusting 'Tae and helping him to where he is now, is one of many other great things he's done in the past decade in terms of players development.

I see _Marcus Garrett_ is heading towards *greatness*, too. If he continues working hard, developing his dribble drives with authority, mixing his shots with fakes, changing direction, taking floaters. Watch out, he will be one heckuva player, a complete package. I enjoy his unselfishness - he can be that guard who can create shots for his teammates.