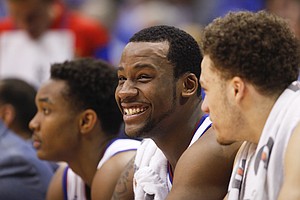 Kansas forward Cliff Alexander flashes a smile on the bench with his teammates during the second half on Saturday, Jan. 31, 2015 at Allen Fieldhouse. by Nick Krug

Back in his hometown of Peoria, Ill., for a charity golf event this week, Kansas basketball assistant Jerrance Howard was in Chicago over the weekend and he caught up with a couple of Jayhawks past and present.

As luck would have it, the two were actually working out together, making it even easier for Howard, now in his seventh season on Bill Self’s coaching staff, to reconnect with former KU forward Cliff Alexander and new KU signee Isaiah Moss.

“He was up there working out with Isaiah,” said Howard of Alexander, a one-and-done KU prospect who recently became a father. “And what was so cool about it was I walked in and he had all Kansas gear on. That was so exciting because Cliff loves Kansas.”

After picking KU over Illinois in a highly publicized and televised college announcement back in 2014, Alexander played in 28 games for Kansas during the 2014-15 season before eligibility concerns ended his college career eight games early.

From there, the 6-foot-9 power dunker who was ranked as the No. 4 overall prospect in the 2014 class by Rivals.com spent bulk of the 2015-16 NBA season on the Portland Trailblazers’ roster — appearing in just eight games — before going on to find some success with four different franchises in the NBA’s G League.

Still pursuing ways to play professional ball — Alexander has played overseas in France and Germany in recent years — the former Jayhawk and Chicago native continues to help out his old school whenever he can.

“Cliff helps us recruit in Chicago,” Howard said. “He’s always repping Kansas, always talking about Kansas. People think because of the way his time ended here that he doesn’t like Kansas, but he does. Everyone asks him how was the experience and he’s like, ‘I love Kansas. I love coach.’ He’s grown up a lot and it was good to see him.”

Spending some time with Moss was also a bonus for Howard, who believes the Iowa grad transfer’s experience, maturity and all-around game will be an asset for Kansas during the 2019-20 season.

His time in Chicago, and on the recruiting trail prior to his trip home, only reinforced that belief.

“What was refreshing was, when we went out on the road (recruiting) last week, a lot of the Big Ten coaches came up to (Self) and said, ‘Hey, you guys got a good basketball player,’” Howard recalled.

Familiar with Moss even before KU signed him because of his relationship with the new KU guard’s coach at Chicago’s Simeon High, Rob Smith, Howard said conversations with Smith, past and present, only added to the excitement around adding Moss to the 2019-20 roster.

“Everyone talked about his shooting, which I know we needed,” Howard recalled. “But I have a relationship with his high school coach and he was like, ‘Jerrance, this dude can guard.’ That’s what’s really going to stand out with coach and the fans. We got a two-way player and we got a good one.”

What stands out most to Howard about Moss is not so much his skill set as it is his veteran presence.

“He’s been battled tested,” Howard said. “He started for three years and his demeanor is one where he doesn’t get too high or too low, which is why he’s really good in the clutch. … Those fifth-year seniors are like McDonald’s All-Americans now. That’s how I look at it. They help you win. They understand what you have to teach guys that are coming in, freshmen. There’s nothing wrong with it. Everybody’s got to go through it. And it’s stuff that you can’t really learn until you go through it. But (older players like Moss) understand getting their rest and eating right and the importance of studying scouting report and that every possession counts.”

.."some success... in the NBA's G League. That strikes me as somewhat of an oxymoron.

Regarding Isaiah Moss, I'd feel a lot better if he could somehow reclassify to the Class of 2021!!

OOPS..got him mixed up with Tre White.

Feel bad for the way things ended for Clif. It would have been so good for him and us to have him back for a second year.

Same here. I don't know if the situation would have ever allowed him back on the court but even if it required him to ride the pine for a season it would have been worth it. Silvio's patience worked out for him.

Cliff played a soft high school schedule to make him be viewed as standout elite. The recruiting world takes advantage of players for one team (uses them to make one team bad if they know they will head to one school) and help them for another team (if they know they will choose that school). Somehow (their is a secret tool box that tells and more specifically perhaps steers elite Anthony Davis’s away from KU. “Could be bad news from who knows when.”