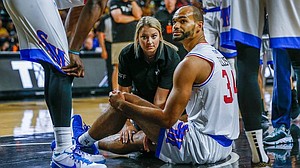 Former KU forward Perry Ellis was injured in what proved to be a short-lived run through the TBT tournament last week with Self Made in Wichita, bringing into question the status of Ellis’ immediate professional future.

Just nine days before Self Made’s Round 1 loss, Ellis inked a new contract with Osaka Evessa club in Japan for the upcoming season.

Now, he’s awaiting surgery and rehab and wondering where his next opportunity might come.

The former KU All-American, who spent the early portion of his pro career playing in the NBA’s G League as well as overseas in Australia, Italy, Germany and Turkey, revealed this weekend the extent of his injury in a YouTube video that was not exactly Ellis’ idea.

“My girlfriend’s kind of making me do this,” Ellis said with a laugh. “Not gonna lie. But, nah, I’ve got a lot of time on my hands now so I think it’ll be kind of cool to do this. This is a way I can keep people updated on my journey (of) trying to return back to the court.”

The injury — a tear of the patellar tendon in Ellis’ right knee — happened shortly after Self Made’s opening game tipped off.

In the video, Ellis explained that he knew right away that it was his patellar tendon.

“Sure enough, I went to the hospital and that’s what it was,” he said. “When I looked down at my knee, I said, ‘Yo, it looks like I’ve got a (disproportionate) knee like a camel. This ain’t looking right. Something looks crazy.’”

Ellis, who has played professionally in the NBA’s G League, as well as in Australia, Turkey and Germany, said the injury will keep him from going to Japan and instead force him to rehab and recover while looking for his next opportunity to play professional ball.

“That’s basketball,” he said. “And now it’s just time to get better. It’s a new obstacle in my way and now I’m just trying to get better and get back to what I was.”

The former KU forward who will turn 26 in September said his immediate future holds a lot of Xbox and icing of his knee until the swelling goes down enough to have surgery.

He plans to track his journey with video updates on his YouTube channel throughout the process and said he was appreciative of all of the love he had received since the injury occurred.

“Last but not least, I want to thank everybody for the support and prayers and all the messages,” Ellis said at the end of his video. “This is my way to kind of keep up with you all and kind of keep you guys in the loop.”

not good! and what's with Kansas teams and early round exits. Can't we catch a break???

Kansas has one of the best "average victories per" tournament in modern basketball. Reality does not support your claim.

we are also among the leaders in early round exits. Next time, maybe consider all the facts, not just what you consider are important mmmkay!

Do you have some kind of statistical support for that? Here's some facts.

Kansas has 48 tourney appearances. They've made the Sweet Sixteen 34 times.

Since the beginning of the Larry Brown era Kansas has failed to advance past the first round.....three times including ONE missed NCAA tourney.

Sorry Keith. You're an idiot.

Matt...Now, with Perry facing surgery, rehab and no contract, does Self Made and/or TBT provide insurance to players injured during tournament game/practice activities? It would be a shame if Perry, or any other player for that matter, is solely responsible for the financial costs of an injury.

Any word on the likelihood of Perry recovering well enough to be an NBA max contract small forward just like Harrison Barnes?

Asking for my friend Joe...

Totally inappropriate place for extending your "feud" with Joe that no one in the world but you cares about. I would say, "Grow up!," but you would just respond with trite, immature comments to belittle me me that will make you feel better but won't matter to me in the least.

As for Perry, all of Jayhawk Nation's prayers and thoughts are with you. We hope you heal quickly and completely as soon as possible so that you can continue with your basketball journey. All our best!

That was a lot of anger for someone who claims not to care.....

You're right, you belittle yourself well enough with these comments to make it obvious that it can't bother you. Was that trite?