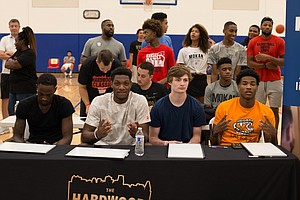 Four current Jayhawks, a couple of whom have experience playing in the Hardwood Classic AAU event and others like it, served as celebrity judges for the event’s slam dunk contest on Friday night.

Juniors Marcus Garrett and Silvio De Sousa, sophomore Ochai Agbaji and freshman Christian Braun, took their spots at the judges’ table on Friday night to watch a series of competitors break out their best and biggest dunks to impress both the judges and the crowd, who packed Court 3 after another full day of AAU action at Sports Pavilion Lawrence.

Zack Spann, of the Minnesota Magic, wound up winning the dunk contest, throwing down a wicked, reverse jam that he pulled up from all the way between his legs while flying through the air to hold off all other competitors.

“I’ve competed in this event my whole life and just being on the other side of it is really cool,” said Braun, a freshman from nearby Blue Valley Northwest High. “I’ve been able to watch a lot of really good players in the 3-point and dunk contests and it’s always a lot of fun.”

As recent as two years ago, former Oklahoma standout Trae Young, who just completed his rookie season in the NBA with the Atlanta Hawks, was the 3-point shootout winner.

On Friday, another MOKAN player, Spencer Bain, followed in Young’s footsteps to win the 2019 3-point contest.