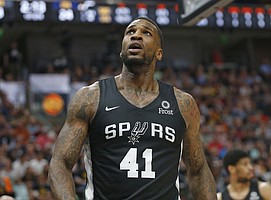 San Antonio Spurs forward Thomas Robinson looks to the basket during the first half of the team's NBA summer league basketball game against the Utah Jazz on Wednesday, July 3, 2019, in Salt Lake City. by AP Photo/Rick Bowmer

As the NBA’s Summer League in Las Vegas draws to a close, it’s time for one final look at how a few former Jayhawks fared.

For the past two weeks, nearly a dozen players who once suited up for Bill Self tried to put their best feet forward to catch the eye of NBA teams in time to earn a spot on one of the league’s 30 rosters heading into the 2019-20 season.

Some of them, like Charlotte’s Devonte’ Graham and Detroit’s Svi Mykhailiuk were basically locks to be on an opening-night roster because of their contract situations and performance during their rookie seasons.

And while putting up points and flashing confidence are key elements of making a roster, there’s much more to these Summer League auditions than scoring.

In a recent interview with Bleacher Report’s Sean Highkin, Robinson explained as much while talking about his lottery past and hopes for his future.

“I’m not 30, man,” Robinson told Highkin. “I’m only 28. I’m not no old, retired player. I can still play. I can jump just as high as these young guys. I can run just as fast. I can play with anybody. I'm just trying to get back and show teams that I'm ready to return.”

Doing that, after two years overseas, is about much more than displaying the physical dominance that made Robinson and All-American at Kansas and a lottery pick in the 2012 NBA Draft.

It takes savvy and smarts, too. In fact, that might be the most important part for Robinson, who told Highkin that one NBA GM recently told him that his lack of basketball IQ would keep him from enjoying a long and lucrative career at basketball’s highest level.

While Robinson admitted that was hard to hear, he also took it to heart.

“Over the course of the last two years, I really locked in on watching certain players,” Robinson told Highkin. “I changed my game from watching Kobe (Bryant) and LeBron (James) to paying attention to Draymond (Green) and Montrezl Harrell, and how they’re finding success in the league. That’s helped make the game so much easier for me.”

While some of that showed up this summer, when Robinson averaged eight points and seven rebounds per game on 57% shooting in helping the Spurs finish 2-3 in Las Vegas, the exact benefits of that approach remain uncertain.

If enough teams saw it and believe that the more cerebral Robinson is what they’ll be getting, that might be enough for them to offer a roster spot. If not, there’s still plenty of money to be made and work to be done overseas for the former Jayhawk.

Here’s a quick look at a few recent highlights and big games from the other Jayhawks who played in Vegas this month.

Much in the way he did during his lone season at Kansas, Newman went out with a bang with the Cavs’ Summer League squad.

In 31 minutes of a two-point win over Sacramento on Friday night, Newman scored 33 points on 11-of-17 shooting, including 4-of-6 from 3-point range with four rebounds and two steals.

Frank Mason III, who was waived by Sacramento on July 4 but retained a roster spot on the Kings’ Summer League team, not only did not play in that game but also did not even appear in the box score as a “DNP,” signaling that the search for his new NBA squad had fully begun.

If you’re on Twitter, you likely saw Mykhailiuk’s cross-over, step-back 3-pointer that made his defender fall down and reminded Kansas fans of just how talented the Ukrainian guard was at KU for four seasons.

While that highlight certainly made the rounds, it was one of just a couple for Mykhailiuk in his final Summer League game with his new squad. In 31 minutes of the Pistons’ 20-point loss to Brooklyn, the second-year pro scored six points on 2-of-12 shooting, with four rebounds, three assists and three turnovers.

In three games last week, Mykhailiuk shot 7 for 25 from the floor and scored 22 points.

The second-year pro and former KU All-American played in one of three games for the Hornets last week, a clear sign that the franchise has seen enough from its former second-round draft pick to know what they’ve got heading into the 2019-20 season.

In that game, a 75-72 loss to Chicago, Graham scored 14 points on 5-of-12 shooting and grabbed seven rebounds and dished seven assists in 29 minutes.

If his career continues to progress at the rate it’s going, that outing could go down as Graham’s last in the Vegas Summer League.

Landen Lucas’s time in the NBA’s Summer League could be winding down, as well. The former KU big man played just one minute in a Hawks win over the Spurs last week and three minutes in a 20-point win over the Pacers a couple of days earlier.

Withey, who also was included in the recent Bleacher Report article featuring former KU teammate Thomas Robinson, played in just one of four games for the Wizards last week, netting four points, one rebound and two blocks in 13 minutes in his lone appearance.

Withey’s professional future is likely overseas, where he played the 2018-19 season.

“Even if nothing comes about (from 2019 Summer League), I played in the NBA for five years and I got my pension, so I'm good,” said Withey in the Bleacher Report story.

Hope these guys are frugal with their paychecks. Except for Landen they've all spent some time in the NBA earning at least the league minimum. A couple years in the NBA is more money than most people make in a lifetime.

Matt, any word on the NCAA notice of allegations? They said two high profile programs would receive a notice by early July. So far NC State is the only program to receive a notice.

Haven't they shown that KU won't be affected by this? The only violation believed to be present is the $2300/$2500 payment to SDS, which he sat for an entire year, once it was formally found. All other violations the player never played. The only other thing is that there is a wiretap with an assistance coach that has no context and the FBI will not share that with the NCAA. All in all, I think it is becoming a dead story. I could be wrong, but I think a lot of people have been saying for a long time that KU actually isn't the school that is going to get targeted. In fact, I think the NCAA really tried hard to incriminate the school with really failed attempts.

I could be wrong, but my impression is that these aren't the droids your looking for....move along.

We know the NCAA has been investigating KU for at least four months. I have yet to read anywhere the outcome or if those investigations have come to a conclusion.

If KU is one of the 6 (which I don't think is the case but anything is possible), it's likely some others will come first like Arizona, Louisville, TA&M, Okie St., and maybe Oregon. Those are schools that the NCAA has proof that the head coach or an assistance was directly involved in giving money to a recruit, or getting money from one of these middle men for the purpose of paying a player.