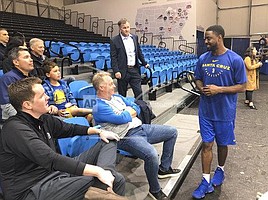 In this Dec. 4, 2018 photo, from left, Santa Cruz Warriors coach Aaron Miles visits with fans and sponsors after their basketball practice in Santa Cruz, Calif. As the Santa Cruz Warriors huddled together after practice, Darius Morris gave a quick recap of his adventure to the Arizona desert a day earlier to interview with the Suns. Phoenix needed a point guard with Devin Booker's hamstring injury, and Morris was in the mix. Coach Aaron Miles, who so wishes he were still playing, had to stand in leading the offense given Morris' absence. Such is life in the topsy-turvy, changing-by-the-day G League, when Golden State or another club might come calling at a moment's notice to swipe a top player for promotion to the NBA. (AP Photo/Janie McCauley) by Matt Tait

The Golden State Warriors on Thursday officially announced a move that many already knew was coming.

Former Kansas point guard Aaron Miles, a member of Bill Self’s coaching staff for one year during the 2015-16 season, officially has been promoted to the role of full-time assistant coach on Steve Kerr’s staff.

Miles will serve as one of four Player Development Coaches on the Warriors’ staff.

It’s hardly a new environment for the 36-year-old Miles, who has been the head coach of the Santa Cruz Warriors (Golden State’s G League affiliate) for the past two seasons and also spent time with Kerr’s staff during the playoffs.

During the 2018-19 season, Miles led Santa Cruz to the G League’s Western Conference Finals after posting a 34-16 record, the second best in franchise history. He finished his stint in Santa Cruz with an overall record of 57-43 and helped five players earn call-ups to the NBA.

His connection to the organization goes back beyond his time in Santa Cruz. In 2005, after capping off one of the most successful point guard careers in Big 12 history (his 954 career assists still rank as the most all-time among Big 12 players) Miles joined the Warriors organization as a training camp invitee following the 2005 NBA Draft.

He appeared in 19 games for Golden State during the 2005-06 season and spent the next nine seasons playing professionally overseas.

In 2015-16 he broke into coaching with Self’s staff and then spent the 2016-17 season as a full-time assistant on Joe Dooley’s staff at Florida Gulf Coast.

During the 2017-18 season, Miles’ first in Santa Cruz, the organization was named the NBA G League Franchise of the Year.

Now that Miles is on an NBA bench full time, don’t be surprised if the promotions keep coming in the years ahead.

When talking about Miles following his promotion to head coach in Santa Cruz back in 2017, the Warriors’ front office had nothing but flattering things to say about the young-and-rising coach.

“We’re absolutely thrilled to introduce Aaron Miles as the new head coach of the Santa Cruz Warriors,” Golden State general manager Kent Lacob said in a release. “Aaron has stood out as a leader at every stop in his playing career and as a collegiate assistant coach. We are confident that he will be a tremendous fit for our team and our organization...”

Warriors President Chris Murphy echoed similar sentiments: “Aaron has tremendous experience and basketball knowledge to share with our players and fans. I believe he will be a terrific ambassador for the Santa Cruz Warriors organization and an exemplary member of the Santa Cruz community.”

I'm telling you right now: upon Bill Self's retirement, Aaron Miles should be very HIGHLY considered as the next coach at Kansas.

This is the second time I've seen someone mention this today and I have to admit, I've never really even considered it. No doubt he could be a solid guy to consider, though.... when that time comes.

Would like to agree although professional coaching versus collegiate are very different, especially with the recruiting component. Would like to see him get his feet wet in the collegiate ranks first. Wishing him well and continued success

I don't entirely disagree. There *is* a difference between the two, and an NBA coach (even assistant coach) does not always a great college coach make. But there are mitigating factors here. One, Aaron Miles is well-versed in Bill Self's offense. He knows it, and so from an offensive scheme standpoint the transition would be seamless. Two, *any* coach at Kansas coaches and recruits with the name of the University behind him. Three, having a window into the NBA is an effective recruiting tool. Aaron Miles will no doubt have NBA connections. He can talk about the next level with gravitas, and that's sure to play well in recruits' minds. Four, recruits would be made aware of the close connection between Miles and Self. Five, Miles can expand upon offensive schemes that he already knows. Six, while amateurs don't have the time that professionals do, it would be rather easy for him to pick out areas that players need to be developed on the court (I mean just look at his former job description: "player development"). And seven, the G-league deals with a lot of college-type players, and Miles has already proven he can be successful with them.

Again, no one has a crystal ball to know what Miles would look like as a college coach. But I see no evidence that would infer a transition to the college game would be a difficult one. That's all I'm saying.

I agree with you this time Joe, but hoping it's 10 years from now and Aaron is already a HC in the league!

Way to go Aaron! Rock Chalk Nation is proud of you and the great way you represent KU as a successful, hard working alumni! Keep it up!