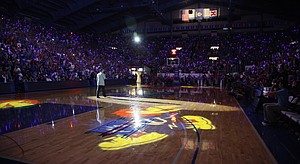 Large Jayhawks are cast onto the court as Kansas head coach Bill Self addresses the crowd during Late Night in the Phog, Friday, Oct. 15, 2010. by Nick Krug

While the date of Late Night seems to be changing and arriving sooner every year, there are still a few things about KU basketball’s annual tipoff event that remain the same.

From the classic Late Night countdown by Kansas fans to the organization and structure of the event itself, Late Night in the Phog, set for its 34th edition on Friday night, has continued to be one of the most anticipated events on the KU sports calendar. And this year’s extravaganza does not appear to be any different.

Sure, the event is earlier than ever — last year’s Sept. 30 date was the earliest in history and we’re checking in two days earlier than that even this year — but that just adds to the excitement, as fans of Kansas basketball don’t have to wait quite as long for their favorite team to get back on the floor.

The Jayhawks actually begin practicing Tuesday — the first official day allowed by NCAA rules — and will use Late Night’s scrimmage as a second practice of sorts, even if it is more about the festivities and the spectacle than X’s and O’s.

With that in mind, let’s take a look at a few key questions surrounding this year’s Late Night.

The nuts and bolts of what’s what with the 2018-19 team won’t be revealed or learned for several weeks still, but Late Night itself comes with a handful of questions. So let’s tackle them.

• First the details: The 34th annual Late Night event, which will be free of charge and open to fans on a first-come, first-served basis until Allen Fieldhouse fills up, is set to begin at 6:30 p.m. But the fun will start much sooner than that. Here's a look.

Fans attending the event are encouraged to bring a nonperishable food item to donate to Just Food. Monetary donations also will be accepted at the event at entry. Additionally, there will be a 50/50 raffle, with the proceeds benefiting Just Food.

With school in session, all university parking lots will be restricted until 5 p.m., with the exception of Lot 90, located across Naismith Drive to the southeast of Allen Fieldhouse, which will be available for public parking at noon. During the day, public parking is available in the parking garage just north of Allen Fieldhouse with hourly rates. Parking in the garage for Late Night in the Phog after 5 p.m. will be $5 per vehicle.

Be prepared for the entry process to be a little slower than usual due to the security measures and the large amount of fans trying to enter at the same time. According to KU Athletics, all persons — staff and guests — are subject to screening before entering Allen Fieldhouse. Walk-through metal detectors will be the primary means of screening. For guests who are unable to use a walk-through metal detector, hand-held metal detectors will be used, with physical pat-downs as a final alternative option. Any person who does not consent to screening will be denied entry into the Fieldhouse. For more information on what is and is not allowed inside Allen Fieldhouse, please review the clear bag policy and the list of prohibited items. A bag check will be provided for a $5 charge for those not wanting to walk back to their vehicles. The bag check will be located at a secured tent on the corner of Naismith Drive and Allen Fieldhouse Drive.

• Who is this year's celebrity performer? Beyond the men’s scrimmage, which caps Late Night each year, the question of which musical act the Jayhawks will bring in seems to be one of the most anticipated aspects of Late Night. And this year does not figure to be a letdown. Monday night, during his weekly "Hawk Talk" radio show, KU football coach David Beaty spilled the beans that Grammy-winning rapper 2 Chainz will be at Late Night this year, performing four or five songs for 15 or 20 minutes. It marks the third year in a row that KU has brought in a big-time rap artist (Tech N9ne in 2016 and Lil Yachty in 2017) for the event and continues the tradition of adding a celebrity flare to an already wild night. In the past, Hollywood actor Rob Riggle (2014), "Survivor" winner Dani Boatright and, of course, dozens of famous or soon-to-be-famous recruits have packed Allen Fieldhouse for the season kickoff event, and 2 Chainz will be the latest in a long line of big names at this year’s event.

• What will KU’s depth mean for Late Night? Simply put, it could mean a more intense scrimmage. Regardless of how you break it up, this year’s roster features two pretty strong starting fives and a few bodies behind that even. Picture this: The crimson team trots out Charlie Moore, Quentin Grimes, Marcus Garrett, Dedric Lawson and Udoka Azubuike. And the blue team runs with Devon Dotson, Ochai Agbaji, Lagerald Vick, Silvio De Sousa and David McCormack. Talk about an all-out battle between a bunch of dudes who a.) want to secure bragging rights and b.) don’t want to get punked in front of the KU faithful. “I think we’re going to play defense (this year),” Garrett said recently with a smile. “I think it might be a little competitive out there. That’s definitely what (depth) does.”

• Who’s the one to watch? If you’re picking just one KU player and you can get past the idea of watching everything 7-foot monster Azubuike does around the rim, I’d get my eyes on freshman Grimes, who has the potential to be an absolute star this season. Grimes was terrific in high school, even better during the all-star circuit this spring and summer, and played a big role on the Bill Self-coached U17 USA team that won gold at the FIBA Americas in June. After that, he arrived at Kansas and has just kept working on his game. Watch him with the ball, watch him off the ball, watch him defend and watch him hunt highlights, like this one from a team shoot-around on Monday afternoon.

• What about recruiting? Well, as you all surely know, one of the biggest parts of Late Night is the recruiting element, with both the festivities and the students doing their part to wow the recruits who are in the building. Each year, a dozen or so official and unofficial visitors make the trip to Late Night to take in the scene and see what Kansas is all about. The Jayhawks don’t land all of the visitors, of course, but it’s rare that at least one or two of the guys who visit don’t wind up becoming Jayhawks in the future. Heck, some guys have been so impressed by what they saw that they committed to Kansas in the days that followed. And while that might not be the case this year, the recruiting element will be as big as ever, with a few elite targets expected to be in the building on Friday night.

• Don’t forget to keep an eye on? KU assistant coach Kurtis Townsend. Sure, KU coach Bill Self has been at the center of the spectacle for the past 15 years, but Townsend has always done a great job of using his sense of humor and wit to steal at least a portion of the spotlight. So if you see a skit featuring Townsend, don’t dismiss it as a good time to go to the bathroom. Dig in and get ready to laugh. You won’t be sorry. 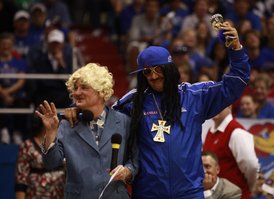 • Oh, by the way ... For those who can't wait until Friday to get their first glimpse at the team, here's a Twitter post from senior Lagerald Vick of the Jayhawks after Tuesday's final boot camp session of the year. Clearly, these guys have put in some work in the weight room and appear to be in great shape entering the 2018-19 season.

Azubuike looks like he's ready for a staring role in the next Black Panther movie. Ripped!

They all look ripped. Look at Mitch's arms. Way bigger than last year. These guys have been lifting big time.

Is there any TV coverage??

My favorite celebrity attending Late Night was Larry Bud Melman back in the Larry Brown era.