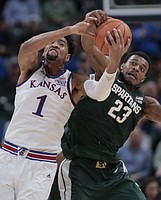 Kansas forward Dedric Lawson (1) fights for a rebound with Michigan State forward Xavier Tillman (23) during the first half of an NCAA college basketball game at the Champions Classic on Tuesday, Nov. 6, 2018, in Indianapolis.

Quick grades for five aspects of KU’s 92-87 win over Michigan State on Tuesday night at the Champions Classic at Bankers Life Fieldhouse in Indianapolis.

Any time you hang 50 points on a Tom Izzo coached team in a single half, you’re doing something right. The thing about KU’s offensive night was that they did not even fully click. KU shot lights out from 3-point range most of the way and was pretty good in transition and smart in the execution of their game plan to pound it inside. KU's offense struggled to close, but if there’s one thing that should scare the daylights out of KU’s future opponents, it’s that this team scored 90-plus against Michigan State and could have played better. Still, hard to give KU anything other than an A for a night like that.

KU’s transition defense was bad early and the Jayhawks benefited from a bunch of Michigan State missed shots in the first half. KU was active in its half-court D and forced a bunch of Michigan State turnovers, as well. Still, when Kansas had a chance to bury the Spartans with defense, they never quite threw the final punch, forcing the offense to carry the team to victory. KU’s D will get better and the Spartans are a solid, veteran team. But this was nothing more than a slightly above-average effort on the defensive end, with a few too many easy buckets given up and fouls handed out.

Udoka Azubuike had a monster few minutes early and then kind of disappeared. Those minutes were huge in KU hitting the Spartans with an early run to gain separation and featured Azubuike blocking three shots and playing with the kind of hunger KU’s coaches want to see from him at all times. Dedric Lawson had a quiet night and ended up with a ridiculously good line of 20 points, 14 rebounds, 6 assists. Both will get better and give more consistent effort, but what they showed in this one will win Kansas plenty of games this season and both will be absolute matchup nightmares for so many teams Kansas will face.

Lagerald Vick had a rough night offensively, Marcus Garrett was off pretty much everywhere and K.J. Lawson did about what you would expect him to do. So why an A grade for this category? Because freshmen guards Quentin Grimes and Devon Dotson were flat-out terrific. Both shot it well, looked comfortable and proved that the big stage is something they very much enjoy. They weren’t without their share of mistakes, too, but there’s no way KU would have won without their play tonight.

Self played 10 guys and the five non-starters all had decent moments. Mitch Lightfoot flashed improved skills in the post and hustled as per usual. David McCormack gave KU a few decent minutes with the bigs in foul trouble. And K.J. Lawson and Marcus Garrett both gave Kansas enough so Self could sub out Grimes and Dotson a little. It was not a stellar night for the Kansas bench by any means. But the mere fact that Self always had someone to turn to no matter who picked up a foul or a silly turnover was new territory for Kansas and the Jayhawks used it to their advantage well enough to keep Michigan State at arm’s length most of the night.

Good start, poor finish....A couple of players struggled but the rest took up the slack. I would say that Devon Dotson seemed to drive the lane and right into 2 or 3 guys a few times and looked either out of control or overwhelmed. Grimes looked like a veteran player who was in control of his game. D. Lawson struggled and still put up solid numbers...when he is on, he's going to be a load for opposing teams.