A look at KU's March 3-point shooting, entering 2nd round of NCAA Tournament 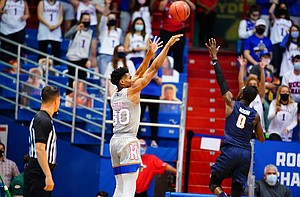 Kansas guard Ochai Agbaji (30) puts up a three over UTEP guard Souley Boum (0) during the first half on Thursday, March 4, 2021 at Allen Fieldhouse. by Nick Krug

With a long and athletic USC defense standing in between Kansas and a trip to the Sweet 16, the Jayhawks are going to have to knock down some 3-pointers Monday night at Hinkle Fieldhouse to get out of the NCAA Tournament’s second round.

But considering this is March and the Jayhawks have now played a few games this month, I thought it might be interesting to get a quick reminder of who’s been hitting from deep of late.

Looking at the past three games specifically — all of them played in March — Agbaji has continued to be KU’s best option.

That's to be expected from Agbaji at this point. But a couple of surprising contributors have kept KU's 3-point shooting from falling off a cliff in March, as some of KU's production from others took a dip and one shooter missed a game.

Obviously the most surprising development behind the arc has been the shooting of renowned non-3-point threat Marcus Garrett, who is cashing in lately, after going 15-for-51 (29.4%) in his first 25 games of the season, before March got here.

Garrett, a senior, has gotten hot in one game from time to time during his career, but he had never made two or more 3-pointers in consecutive games until knocking down two against Oklahoma in the Big 12 tournament and opening up the NCAA Tournament with three 3-pointers versus Eastern Washington.

So counting on Garrett to keep burying deep shots against USC might prove to be risky.

Wilson is obviously a wild card, having just rejoined the team, leaving KU coach Bill Self uncertain about how much Wilson might even be able to play against USC, not to mention how effective he will be coming off a COVID-19 pause.

So the Jayhawks’ overall 3-point success could come down to how often Agbaji and Braun find themselves with open looks.

And the ultimate X-factor might be how USC decides to defend Dajuan Harris. Harris is 8-for-13 on the season and isn’t going to shoot unless he’s left wide open and the opportunity comes within the rhythm of the offense.

But the redshirt freshman sure looked like a capable shooter in his March Madness debut, going 3-for-4 vs. EWU.

If there's a tight whistle tonight, we're in trouble. If not, then we have a decent chance.