Jalen Wilson redeems himself in crunch time after uncharacteristic 1st half 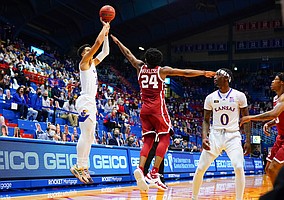 Kansas forward Jalen Wilson (10) elevates for a three from the wing over Oklahoma guard Elijah Harkless (24) during the second half, Saturday, Jan. 9, 2021 at Allen Fieldhouse. Also pictured is Kansas guard Marcus Garrett (0). by Nick Krug

It seemed Saturday just wasn’t going to be Jalen Wilson’s day. Lackadaisical maneuvers on offense, lapses on defenses and even a missed dunk. And that was before halftime.

Good thing for Kansas that its leading scorer this season was mentally tough enough to find the Jalen Wilson fans and teammates have grown to love.

Crunch time brings out the best in the Jayhawks’ redshirt freshman starter. That was the case again at Allen Fieldhouse, where Wilson looked like himself in the game’s final minutes, making a full 180 from a first half plagued by mistakes.

KU wouldn’t have survived its scare from Oklahoma, 63-59, without Wilson recovering from the 13 minutes he played in the first half, which included 0-for-2 shooting and — far more troubling — six out of the ordinary turnovers.

Things went so poorly for Wilson that his head coach, Bill Self, called it “a rough day in a big way.”

Wilson’s first successful field goal attempt of said day didn’t come until there was 5:05 left in the second half. But he worked his way toward redeeming himself with his efforts on the glass throughout a surprisingly tight game with the Sooners (6-4 overall, 2-3 Big 12). A 6-foot-8 inside-outside threat, Wilson pulled down seven of his 11 rebounds in the second half.

And when it looked like OU might be poised to put together an upset bid late, Wilson played like a man who hadn’t missed a shot or slipped up at any point all day.

The aforementioned first basket came on a 3-pointer set up by Christian Braun, giving KU (10-2, 4-1) a five-point lead. Even so, the Sooners would take the lead twice in the final four minutes.

Wilson fed David McCormack for the basket that put KU ahead for good with a little more than two minutes left. Then Wilson stretched the lead to four on another 3-pointer at the 1:28 mark.

“That was crucial,” McCormack said of Wilson’s second 3-pointer, that made it a two-possession lead. “That was definitely a big shot. It was also a big momentum booster, as well.”

That wasn’t the Jalen Wilson who played in the first half. That Wilson was unrecognizable.

“He turned it over six times,” Self said, “and he was playing out of character and he was forcing it. And he didn’t let the game come to him at all the first half. That was the thing.”

Self didn’t stop there: “Didn’t guard. Just really didn’t do anything. I think he was a little too amped up going against (OU sophomore guard De’Vion) Harmon, a high school teammate and probably a little bit of a rival. And just wasn’t at his best. But we had his best down the stretch, which was most important.”

Everyone should know by now not to dismiss Wilson, just because of a slow start. The man shines in moments that aren’t for everyone. He came up with a game-sealing block at Texas Tech in KU’s Big 12 opener, buried a critical 3-pointer late against Creighton and delivered a must-have bucket versus Kentucky. The guy is a winner.

McCormack said he spoke with Wilson before the tide turned and reminded the redshirt freshman of what he looks like at his best.

Added McCormack: “That’s what he did. And he was effective and helped us win.”

Wilson’s confidence in himself didn’t waver when he actually played like a redshirt freshman for a change.

“Second half late,” Agbaji said, “he knew that he was going to have to step up for us and make big plays, make those shots. And that’s what he did. And I’m proud of him.”

Wilson has become such a revelation for this Kansas basketball team, it’s easy to forget he barely played as a true freshman. Two games, two minutes, one shot attempt, one foul, one turnover, zero points, zero rebounds — that’s the extent of his 2019-20 stat line.

He gets a pass for having a bad day turnover wise (seven) and tying his season-low for shot attempts (2-for-4), while finishing with nine points and 11 boards in 29 minutes, because he played well with the game in the balance.

That’s just what Jalen Wilson does.

And because of who he is as a player, Wilson will learn from the miserable first half and make sure he doesn’t let it happen again.

Kansas head coach Bill Self on 63-59 home win over Sooners by KUsports.com

David McCormack after leading Kansas with 17 points in 63-59 win over Oklahoma by KUsports.com

Ochai Agbaji on KU's performance in crunch time during 63-59 victory against OU by KUsports.com

Keep on jammin', Wilson! I mean literally - you look much better with the dunk. Even if it fell short. Don't stop!!! Take a foot closer, you'll be in the top 20 next year!

Jalen was trying too hard to impress his former teammate - Harmon - and needed to just relax and let the game come to him. When it mattered most, he did...

Wilson, please watch below, it'll make you a better player:

Trust me, you'll be dunking all over the floor each game. It's that simple. You've got the tools, all you need is a little bit of advice. Master the fakes, you'll beat anybody. You'll become more productive not only in terms of scoring, but also in assists.
You're welcome!!!

As the old cliche goes, it's not how you start, it's how you finish. Those of us Jayhawk fans who also root for the Chiefs know that very well from last year's Super Bowl championship.