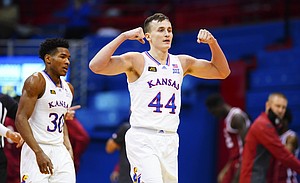 Kansas forward Mitch Lightfoot (44) flexes after a bucket and an Oklahoma timeout during the first half, Saturday, Jan. 9, 2021 at Allen Fieldhouse. by Nick Krug

With the Jayhawks’ young sixth man guard, Bryce Thompson, out of the mix recently due to an injury, Lightfoot’s minutes have become more consistent as head coach Bill Self has played larger lineups instead of mixing in more five guard combinations. In November and December, Lightfoot never played double digit minutes in consecutive games. His 15 minutes in a home win over Oklahoma on Saturday, though, made it three in a row where he gave KU 14 or more minutes off the bench.

The regular opportunities to contribute are allowing Lightfoot to make an impact. In the aftermath of a bad home loss to Texas on Jan. 2, both McCormack and Lightfoot bounced back with a big week at TCU and versus Oklahoma.

“I think Mitch has played equally well,” Self said after noting how McCormack has come along, “in the minutes that he’s had. And I just think that’s been our best lineup, to go that route.”

Lightfoot’s numbers rarely are eye-catching. The 6-foot-8 forward had four points, five rebounds and one block in 17 minutes at TCU. He followed it up with seven points and two blocks in 15 minutes against OU.

As Self said on Monday, ahead of the No. 6 Jayhawks’ trip to Oklahoma State, it’s been rare this season for KU’s bench players to sub in and produce at the level of a starter. But that’s what Lightfoot did against the Sooners. In the 14:56 that he was on the floor, KU outscored OU, 27-21. The Sooners edged KU, 38-36, when Lightfoot sat.

“Energy’s the biggest thing with Mitch,” senior guard Marcus Garrett said of Lightfoot’s contributions. “And Mitch just knows everything. He’s been here for awhile. He knows how we want to guard, he knows how we run our offense. He basically comes in and just does everything we kind of need.”

After Lightfoot’s minutes fluctuated throughout KU’s first nine games — he only played 10 or more minutes against Gonzaga, Washburn and Omaha — it will be interesting to monitor his involvement once Thompson returns. Having the entire rotation healthy and available could lead to more five guard lineups, depending on the opponent.

Will Lightfoot’s minutes fall off when there are games where it makes sense to deploy five perimeter players for stretches? Or will McCormack and Lightfoot split the traditional big man minutes more evenly in those games?

Lightfoot showed against OU especially he can comfortably set up on the perimeter offensively when KU wants to space the floor. He can screen and roll or slip a screen and read the defense to make himself available for an easy feed inside. Many times, his activity on offense forced the Sooners’ defense to help in the paint — Lightfoot simply playing hard and making OU react created angles for other passes and/or drives, resulting in a more fluid offense.

McCormack had a perfect way to describe Lightfoot’s outing: “Mitch was Mitch.”

You want some vivacity out of any reserve in the lineup, and Lightfoot brings that on both ends of the floor when he’s at his best. Even though he’s not a rim protector in the traditional sense, Lightfoot is KU’s best shot blocking help defender, which is why he leads the Jayhawks with an 11.6% block percentage, per sports-reference.com.

If there’s one area where he can be even better, it’s on the glass. Somewhat surprisingly, Lightfoot’s output against OU didn’t include a single rebound. It happened to be a problem for McCormack (one rebound), as well. Lightfoot in most of those situations, Self said, wasn’t guilty of poor effort. His energy typically goes into boxing out when an opponent’s shot goes up.

“I think a lot of times they’re more worried about blocking their man off,” Self said of Lightfoot and McCormack, “and keeping their man from getting the ball and allowing somebody else to get it, which in times is OK.”

KU didn’t get burned on that front versus OU, because the Sooners only sent one man to the offensive glass. Obviously not every team will take that approach, though. And that’s why Self would like to see an adjustment.

“So I think hitting and going and getting,” Self said of the proper approach following a box out, “and not relying on someone else to get it I think is something that we can improve on.”

Lightfoot’s not a player Self ever has to worry about in the effort and energy departments. And this uptick from the dependable veteran looks like a crucial development for the Jayhawks (10-2 overall, 4-1 Big 12).

Kansas coach Bill Self speaks to media ahead of matchup with Oklahoma State by KUsports.com

Senior guard Marcus Garrett on how KU's defense can take another step by KUsports.com

I remember reading an article about Westbrooke when he was getting all the triple doubles was because their bigs were blocking out so that he could get the rebound and immediately start attack with the ball.

I thought that was his highest score - career high at KU. That is a good progress. Rebounding is one thing, but for him being able to help in offense would be seen as bigger improvement. I feel bad he hasn't shown offense moves other than the same he's been doing the whole career at KU. Drop step, up & under, none of those. Mostly, at the low post, he will just kick the ball out. Or setting high screen, more often called for moving screen. Not to take away his prowess defense, but coaching staff needs to help him develop his offense, too.