KU football could finally be bowl eligible in 2020, but postseason berth is far from automatic 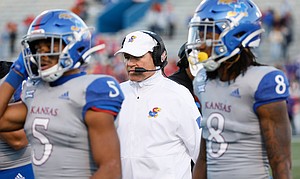 Kansas head coach Les Miles walks off the field after a timeout during the fourth quarter on Saturday, Nov. 2, 2019 at Memorial Stadium. by Nick Krug

As if 2020 weren’t already bizarre enough, it could conclude with the ever rebuilding Kansas football program bowl eligible — technically.

The Jayhawks haven’t won enough games to be automatically considered for a postseason invite since 2008, but the Division I Football Oversight Committee is recommending waiving bowl eligibility requirements for this muddled college football season.

The Division I Council would have to approve the idea when it meets in mid-October, but the waiver is expected to pass, making every FBS team bowl eligible — just for this year — thanks to the complications that surfaced as conferences took different approaches to playing during the COVID-19 pandemic.

The Jayhawks haven’t sniffed the postseason since going 5-7 and missing out on a bowl berth in 2009, Mark Mangino’s final year with the program.

In the 10 years since then, neither Turner Gill, Charlie Weis, David Beaty nor Les Miles has been able to guide the team to any better than a 3-9 season.

While it will be exceedingly easier for teams to receive a bowl invitation this year, that doesn’t mean it’s time for KU to pop the champagne. It’s unlikely any bowl will have to get desperate and bring in a team that only won one or two games, or worse, went 0-for-the season.

That might have been the case had FBS conferences such as the Big Ten, Pac-12 and Mountain West stuck with their postponement plans of playing in the spring. Now that there are far more teams in the mix this this fall, it becomes easier for bowls to fill out those spots with winning — or just below .500 — teams.

This blanket bowl eligibility isn’t for the teams that struggle. Rather it helps clear the pathway for solid teams that end up on the wrong side of .500 because of this year’s unusual schedules.

The Big Ten is playing an eight-game conference-only schedule when it returns in late October. Now a Big Ten team with a difficult slate that competes throughout the abbreviated fall but ends up 3-5 can play in a bowl.

The Pac-12, which just reached its decision to return this week, won’t start playing until November, and its teams only get seven regular season games. A scenario where there are multiple 3-4 teams that caught some bad breaks is easy to envision.

And even with the SEC playing a 10-game conference-only schedule, you know there will be 4-6 teams that clearly look and perform better than the teams that finish at the bottom of the standings in other FBS leagues.

The good news for KU is that it doesn’t have to go 5-4 in Big 12 play to reach the typical minimum requirements for automatic bowl eligibility. But the Jayhawks are expected to be underdogs in every game left on their schedule after losing their opener at home to Coastal Carolina.

KU hasn’t won more than one game in Big 12 play since 2008, when Mangino coached Todd Reesing, Dezmon Briscoe and the Jayhawks to a 4-4 mark, and the Jayhawks beat Minnesota in the Insight Bowl to finish 8-5.

This year’s Jayhawks may be bowl eligible on a technicality, but they will have to go out and win at least three or four games, one would think, to end their postseason drought.

The elimination of bowl eligibility minimums is not that big of a deal if nearly all the FBS teams are playing (assuming the return of the MAC!)
The move is intended to allow conferences to fill their contracts in a season when the P5s won't be padding records on noncon games.