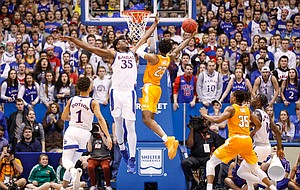 Just about every NBA front office type will tell the public after a draft concludes that Player X was the best prospect available when it was the team’s turn to pick.

That’s the message Utah general manager Justin Zanik presented after the Jazz made Udoka Azubuike its only 2020 first-round draft pick at No. 27.

And while some Jazz diehards might have preferred a perimeter player with more flash to his game and a greater perceived upside than Azubuike, the 7-footer from Kansas whom many projected as a second-round pick, the traditional center could be good enough in his specific role to actually help Utah win more games immediately.

With Donovan Mitchell, Rudy Gobert and Mike Conley, the Jazz aspired to be a dark horse contender in the loaded Western Conference this past season. But Utah’s trip to the bubble ended in the first round of the playoffs as the No. 6 seed. The Jazz blew a 3-1 lead to Denver in a series that came down to the final shot of a Game 7.

Utah’s season wasn’t awful, but a team known for its defense — thanks in large part to 7-1 veteran center Gobert, also known as “The Stifle Tower” — took a noticeable step in the wrong direction. During the 2018-19 season, the Jazz ranked second in the league in defensive rating (105.3), making it three years in a row for the Jazz in the top three in that category. Utah dropped down to 13th (109.8) in the pandemic altered 2019-20 season. And in the playoffs the Jazz’s defensive rating (116.8) ranked 12th.

A fatigued Gobert could be one factor in Utah’s defensive slippage. The two-time defensive player of the year averaged a career-high 34.3 minutes a game in the regular season — and 38.6 minutes in the playoffs.

According to stats from NBA.com, Gobert appeared in seven of Utah’s eight most frequently used lineups this past season. In the two five-man combinations that played most with Gobert as the anchor, Utah’s defensive rating was 102.9 and 103.3.

If the Jazz are right about Azubuike’s potential as an interior defender, head coach Quin Snyder should be able to give Gobert more opportunities to rest and recover without experiencing much of a dropoff in defensive efficiency.

Zanik earlier this week called Azubuike “the most impactful defensive player in the draft,” as The Athletic’s Tony Jones reported.

“He is a terrific rim protector defensively,” Zanik said of the former KU All-American, who blocked 2.6 shots a game as a senior. “He has a great lob radius offensively. He is a unique player, and he comes from a great program, and he’s improved every year.”

The condensed NBA offseason is expected to be a whirlwind of trades and signings in the days ahead, with the start of the regular season less than five weeks away. So Utah’s roster — and its big man rotation — could look different by then.

But it’s worth noting the Jazz don’t have much wiggle room in terms of cap space. Plus, since the organization drafted Azubuike on Wednesday it has traded away its backup center from last season, Tony Bradley, and veteran reserve big man Ed Davis. Those roster moves, as detailed in The Salt Lake Tribune, had more to do with creating some financial flexibility to sign a more desirable lower level free agent.

Unless the Jazz are able to sign an experienced big who is on the market, such as Aron Baynes or Nerlens Noel, Azubuike’s pathway to playing time is clear. All the rookie has to do is continue to give the type of defensive effort he showed as a senior at KU, set screens and catch lobs from Mitchell, Conley and Joe Ingles. If Azubuike can make himself effective in those areas and avoid making too many rookie mistakes, he could be in line to play and contribute even more than Bradley did (4.9 points, 4.6 rebounds and 0.6 blocks in 11.4 minutes a game last season) as Gobert’s backup.

And unlike at KU, where the Jayhawks needed their powerhouse center on the floor as often as possible, conditioning should never be a factor for Azubuike with the Jazz. He’s entering the NBA in the best shape of his life and will only need to check in for a few minutes at a time. If Azubuike runs the floor, doesn’t get lost on defense, battles for rebounds and strives to protect the paint, all of the sudden the Jazz have an ideal fill-in for Gobert.

If this ideal version of Azubuike’s rookie year, or something close to it, plays out, it’s feasible that Utah could actually recapture its defensive prowess, too, raising its ceiling in the deep and talented West.