Pre-draft process could look unrecognizable for NBA prospects, such as Devon Dotson 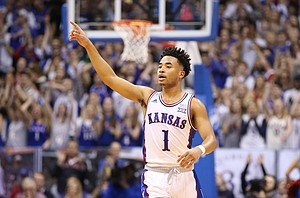 Kansas guard Devon Dotson (1) celebrates a three pointer during the first half, Wednesday, March 4, 2020 at Allen Fieldhouse. by Nick Krug

College basketball stars such as Kansas point guard Devon Dotson didn’t get to take advantage of the NCAA Tournament as a showcase in front of potential NBA employers this March. And the way everything is trending, future opportunities between now and the 2020 draft — whenever that happens — could be scarce.

According to a Tuesday report from ESPN’s Jonathan Givony and Adrian Wojnarowski, the NBA sent a memo to NCAA basketball coaches letting them know players could begin submitting applications to get feedback on their draft stock from the league’s Undergraduate Advisory Committee.

That’s good news for potential early draft entrants such as Dotson, a sophomore, because they can at least start thinking about their basketball future and preparing for what’s next, just days after the unforeseen early conclusion to the college basketball postseason, due to the threat of the coronavirus pandemic.

But the ESPN report also included some foreboding details about a potentially unrecognizable new normal for draft hopefuls. Per Givony and Wojnarowski, NBA executives “widely agree” that the typical procedures used to evaluate prospects will be “severely limited, if not lost altogether,” because the idea of players and scouts being able to travel all over the country for workouts, pro days and the NBA combine seems “extremely unlikely” at this juncture.

Amid all this unpredictability, the outcome of Dotson’s looming stay-or-go decision looks far more obvious. A year ago, Dotson took a prolonged look at his draft stock before returning to KU. And from the day he decided to play for the Jayhawks as a sophomore, a spot in the 2020 draft looked inevitable for the 6-foot-2 point guard from Charlotte, N.C.

What’s more, Dotson’s current head coach, Bill Self, was discussing during a media teleconference how to properly commemorate the Jayhawks’ 28-3 season when he all but said Monday — without naming Dotson specifically — that the second-year guard will enter the draft.

“You’ve got a couple players — or three players — that will not be back. Two of them are seniors,” Self said, referencing Udoka Azubuike and Isaiah Moss. "One, I’m sure will declare, even though it hasn’t happened yet and he hasn’t made that decision. But the reality is at today’s time that that would probably happen.”

So when Dotson officially declares for the draft, he and other potential draftees, it seems, might not get to go through the usual pre-draft process, bouncing from city to city for workouts and interviews with coaches and general managers.

The annual NBA Draft Combine in Chicago is scheduled for May 21-24, but as ESPN reported, nothing is certain at this point. The NBA season is on hiatus for the foreseeable future, too, so the league might have to cancel the combine, because Wojnarowski has reported a mid- to late-June return to action for the league is currently considered a “best-case” scenario.

If teams aren’t even back to practicing by late May, there’s no way the NBA would be able to have its combine at that point. Like most everything tied to sports during these unsettled times, pre-draft normalcy looks very much in doubt. Will the draft even take place on June 25, as scheduled? Who knows.

At least Dotson can enter his name into the draft pool — if he so chooses (spoiler alert: he will) — with confidence that what scouts saw from him during the Jayhawks’ season has him in much better position than he was a year ago.

If Dotson was considered a lock as a first-round pick for the 2019 draft after his freshman year, he wouldn’t have returned to KU. He still might not be quite at that level, so that’s where the loss of workouts and a combine could hurt Dotson a little.

ESPN’s list of top 100 prospects currently ranks Dotson No. 31 overall. In a 30-team, two-round draft, that could mean an early second round spot for Dotson, if teams value him the same way ESPN’s draft experts do.

Dotson proved while averaging 18.1 points, 4.0 assists and 2.1 steals, and shooting 46.8% from the field and 83% at the foul line during his shortened sophomore season that he’s speedy, strong and a tough finisher inside.

The biggest knock on him has been his 3-point shooting. While both teammates and Self say Dotson is a good shooter or has the potential to be one, he only connected on 30.9% of his 3-point tries (38-for-123) during his 30 games as a sophomore. He was more consistent as a freshman (33-for-91, 36.3%), so maybe this year was an anomaly, but teams would still prefer to see better percentages from a guard.

A strong 3-point shooting display during a deep KU run to the Final Four might have helped Dotson’s draft stock. Now he might not even get opportunities to prove himself as a shooter in pre-draft workouts either.

It’s an unfortunate reality for aspiring NBA players, but one Dotson and other could-be first-rounders now have to contemplate.

so Devon can't do the "test the waters" and come back if the input does not indicate he should go? He is the best recruit we could hope for as far as next year.

I seem to recall that players can test the waters once.

The stink of this how everything is closed. It’s not like being on campus and going to the gym work on his 3 pt shot, or even being able to go to any gym. Maybe a hope at a neighborhood park if the weather is reasonable.

Don't they have some kind of a court in their dorm building?

All but Dok and Silvio have gone home.