KU football's spring practices in limbo during these uncertain times 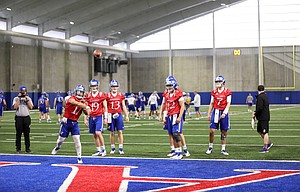 The most crucial portion of the Kansas football team’s offseason was just days away from starting up when the entire sports world came to a breakneck halt.

The Jayhawks were scheduled to start their first spring practice of 2020 at 3:40 p.m. on St. Patrick’s Day. That was before the threat of the novel coronavirus began shutting down athletic competitions of all sorts worldwide.

Once word came down from the conference offices Friday night that all forms of team activities in the Big 12 were suspended, exactly when KU football players will be allowed to reconvene and start practicing became unclear.

Currently, uncertainty is the new status quo. On-campus classes are canceled at KU through March 22. After that, all classes will move online, and the university laid out a plan that anticipates the need for classes to remain in an online platform “for several weeks.” So KU football coaches at this point don’t even know when the players will be allowed back on campus and be able to go about their normal lives.

The Big 12, in announcing the suspension of both organized and voluntary team activities, including team and individual practices, meetings and other such gatherings, said the situation will be reevaluated March 29. On KU football’s original spring schedule, the Jayhawks were supposed to have six of their allotted 15 spring practices behind them by then.

In an absolute best-case scenario, KU and other football teams would get the go-ahead to get back to some normalcy and start spring practices by early April. The way this COVID-19 threat has developed over the past week, though, such an outcome reads like fantasy.

At the other end of this speculative spectrum is the worst-case scenario: no spring football. Coaches and players everywhere would despise that result. But it would feel like an especially fierce blow for the Jayhawks.

This is just the second offseason since Les Miles came in to try and revamp the program. Spring practices are a critical component of such an extensive renovation project.

Sure, the Jayhawks showed some flashes of advancement during their 3-9 2019 season. But improving upon that mark in Year 2 of the Miles regime is not a foregone conclusion. Seniors from 2019 — such as left tackle Hakeem Adeniji, receiver Daylon Charlot, defensive backs Hasan Defense, Mike Lee, Jeremiah McCullough and Bryce Torneden, linebacker Azur Kamara, center Andru Tovi and quarterback Carter Stanley — played important roles on that team. Spring football practices are generally the time when coaches start to get a true sense of which players can step up and fill in vacated jobs on the depth chart.

What’s more, there is no clear favorite to take the place of Stanley as KU’s starting quarterback. Maybe Thomas MacVittie ends up winning the job. Perhaps it will be Miles Kendrick. The presumptive start of the 2020 season is still months away, so conceivably at least, it’s possible that some dark horse candidate would have time to emerge as well. Every aspiring starter — regardless of position — needs the 15 spring practices to go prove himself.

Plus, it’s likely no one was looking forward to this spring practice time as much as offensive coordinator Brent Dearmon. Miles promoted him to OC in the middle of the 2019 season, so Dearmon didn’t really get to run the full-blown version of the RPO offense he loves. KU’s spring practices and the meetings that accompanied them are going to be pivotal for Dearmon and KU’s offensive players, because that’s when the coach will be able to install his system and get the Jayhawks familiar with all of his play calls and cues.

College football is such a moneymaker for FBS programs that it’s hard to fathom spring practices getting completely wiped out. Then again, who would have been able to grasp just a week ago that the NCAA Tournament would be canceled. These are unprecedented times for everyone, let alone college athletics administrators.

As far as spring practices go, all anyone can do is remain optimistic. One would think the Big 12 and other conferences could come up with ways to salvage the spring schedule, even if that means pushing it into the summer.

At KU, the last day of classes is scheduled for May 7, and May 15 is the last day of finals, before a May 17 commencement. If life is back to normal at some point between now and then, maybe teams could at least get the spring practice schedule started late in the semester. And given these unique circumstances, one would figure NCAA and conference decision-makers would be flexible enough to allow practices to take place during summer classes, too, if necessary.

The Jayhawks need those 15 offseason practices before preseason camp gets started in August. KU football is not yet on strong enough ground to withstand the loss of that much preparation time as well as the more established programs in the Big 12 could.

For the time being, all any football player or coach can do is wait. And hope the best.

I'm not sure what is being accomplished by suspending the practices. These guys live in the same dorm, they socialize together, play video games together, go out to eat together, etc., etc. Maybe it's exposure to others, such as coaches, that is the concern but it seems to me the football practices are an activity that doesn't merit cancellation/postponement.

I miss Tom Keegan, his 6 or 7 columns a week on everything (usually loosely sports related) was a daily treat. No one on this current staff of writers even comes close, imho.