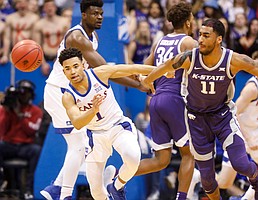 Quick grades for five aspects of the Kansas basketball team’s 81-60 win over rival Kansas State on Tuesday at Allen Fieldhouse.

• A few unimpressive possessions in the game’s first couple of minutes wouldn’t become the trend. After three turnovers and two misses on long jumpers, Bill Self abandoned his two-big starting lineup.

What followed in the next 8 minutes amounted to a clinic, with the Jayhawks showing the assertive approach on offense Self has been looking for lately.

Smart passing and some patience in the half court led to both layups and 3-pointers, as KU sprinted to a 17-point lead.

• KU scored 20 points in the paint in the first half and went 5-for-13 on 3-pointers. The Jayhawks also kept active, with 8 offensive rebounds.

• The Jayhawks’ offense started to look a little sloppy early on in the second half, often as they were a little too eager to pull the trigger on 3-pointers.

• KU reached 70 points for just the second time in Big 12 play and shot 46% in the Sunflower Showdown victory. The Jayhawks were 9-for-26 on 3-pointers and scored 40 points in the paint.

• KU’s energy and effort was just as evident on defense in the first half, as they tried to bury their rivals in a hurry. K-State opened the game 4-for-13 from the floor, and also turned it over 8 times in that stretch. K-State also had two shot clock violations during that span.

The Wildcats ended up shooting 40% from the field in the first half, but their 11 turnovers led to 18 points for KU.

• The perimeter defense by KU kept K-State junior guard Cartier Diarra ineffective much of the night.

• The visitors from Manhattan, down 16 at the half, shot 39% in the final 20 minutes and 39% on the night. K-State definitely missed some open looks, though.

• Udoka Azubuike proved to be as crucial a player as KU had on the floor, even though he only scored one field goal in the first half. The Wildcats’ defenders spent so much time focusing on the 7-footer and collapsing on him when he caught the ball that it left plenty of space for the rest of the Jayhawks to operate in the half court.

KU outscored K-State by 20 when Azubuike was on the floor in the first half, and he scored 4 points.

The big man ended up controlling the glass, though, securing 14 rebounds to go with his 10 points and a double-double.

• David McCormack missed a long jumper from the baseline and turned the ball over in the game’s first couple of minutes, leading to him spending most of the first half on the bench and KU playing four guards.

Just like he did at Texas, McCormack opened the second half on the bench, with Christian Braun replacing him. McCormack finished with 2 points and 4 rebounds.

• Devon Dotson again relied on his speed on both ends of the court to help KU create separation early, coming up with steals, layups and trips to the foul line.

In his second game back since missing KU’s game at Oklahoma due to his hip pointer, Dotson finished with 18 points and 3 assists, plus 5 boards.

• Ochai Agbaji didn’t let some missed shots keep him from asserting himself on offense. Better yet, his activity led to 4 offensive rebounds.

As usual, it was Agbaji’s defensive work that kept him on the floor. The sophomore guard produced 6 points on 3-for-11 shooting.

• Marcus Garrett didn’t stand out quite as much as usual in the first half, and a lot of that had to do with KU’s other role players coming out eager show they could in fact chip in.

Garrett’s defensive awareness and ability to keep KU functioning on that end kept the Jayhawks comfortable most of the night.

Statistically, Garrett’s night picked up in the second half, as the spacing on the floor and his drives and all-around smart decisions helped him give KU 8 points and 5 assists in the win.

• When Isaiah Moss barely played more than one minute as the first sub of the night, before going right back to the bench, it was freshman Braun’s opportunity to shine.

Braun checked into the game ready to attack. His style of play was the exact opposite of the “timid” approach Self bemoaned regarding KU’s bench three days earlier, at Texas. With Braun as the fourth guard, the Jayhawks took off. He shot 3-for-4 from 3-point range and also showed off his finishing ability on a tough drive and finish over defenders, putting up 11 points in the first half.

On an impressive night for the freshman backup, Braun reminded everyone what great potential he has as a shooter (6-for-10 on 3-pointers) and often stole the show, putting up 20 points.

• Moss at least showed a willingness to catch-and-shoot on quality looks from 3-point range, even after missing his first couple tries early on. The Jayhawks need him taking those open looks from deep to space the floor, even if they’re not dropping.

I wonder how much of the extra action at the end of the game comes from frustration over how the season and rotations have been going. David was the second most aggressive Jayhawk in the incident, while the others seemed more intent on descalating the situation. At some point this season we will need one or more of them.