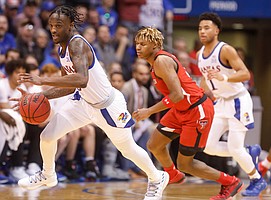 Kansas guard Marcus Garrett (0) comes away with a steal during the first half, Saturday, Feb. 1, 2020 at Allen Fieldhouse. by Nick Krug

Quick grades for five aspects of the Kansas basketball team’s 78-75 win over Texas Tech on Saturday at Allen Fieldhouse.

• The Jayhawks looked poised to blow Texas Tech out in the game’s opening minutes, seeking out open shots and making sure to get the ball inside. The great start would be short-lived but needed.

• KU scored 18 points in the paint in the first half, even as Udoka Azubuike went without a made field goal inside.

• Kansas shot 55% from the floor in the first half, but four players combined to go just 9-for-15 on free throws.

• With Udoka Azubuike finding it hard to stay on the floor versus Tech, and the Red Raiders adjusting well at halftime, the KU offense began to unravel at times in the second half, allowing Tech to make it a one-possession game on a couple of occasions.

• Timely responses to Tech scores and runs made the difference down the stretch. KU shot 48% in the second half and 1-for-5 on 3-pointers. The Jayhawks scored 38 points in the paint.

• Texas Tech missed its first 7 attempts from the field as KU raced out to a 10-0 lead behind strong defense from its four-guard starting lineup, which happens to be anchored by the very large Azubuike. The Red Raiders fell behind by as many as 15 points in the first half. But were able to go on a key spurt when Azubuike checked out of the game with two fouls.

KU limited the visitors to 38% shooting in the game’s first 20 minutes, when the Red Raiders were 2-for-9 on 3-pointers.

• Tech’s offense got comfortable from time to time in the second half, and the Jayhawks quite a few times let the visitors do that by giving up 3-point looks. The Red Raiders went 7-for-12 from deep in the final 20 minutes.

• KU’s only starting big man picked up his second foul at the midway point of the first half. A charge call and a third foul a couple minutes into the second half meant the most valuable man on the roster would spend even more time on the bench.

• KU needs Azubuike on the floor to overwhelm opponents and truly be great. This was not the big man’s day and the senior 7-footer had 5 points and 8 rebounds in 16 minutes.

• KU’s guards all brought an assertive offensive approach to the afternoon. And with the way Marcus Garrett remained intent on getting to the paint, Tech’s defense had to keep moving and reacting. Garrett kept the Red Raiders off balance and set himself and his teammates up for great shots in the game’s opening minutes.

The Jayhawks led by 15 less than 8 minutes in after Garrett made his way inside for his second layup. When he wasn’t scoring off drives, he was assisting for uncontested, high-percentage looks.

• Garrett fell hard on a drive inside late in the first half, appearing to bother his ankle or foot. He already had 7 points and 2 assists when he checked out with 4:25 left until halftime.

He’s Marcus Garrett, though. So he was fine. And by the end of the game he was blocking shots inside in a one-possession game to seal a KU win.

Garrett willed the Jayhawks to a win and gave them 15 points, 5 rebounds, 3 assists and 3 blocks.

• Devon Dotson proved just as impossible for Tech defenders to stay in front of, as the sophomore repeatedly blew by Red Raiders for layup, on his way to 13 first-half points.

After Tech made it a 2-point game with less than 9 minutes to go in the second half, Dotson seemed to take it personally. He sought out a layup, grabbed two defensive rebounds and threw a lob for a powerful David McCormack slam in the following minute-plus, as KU extended its lead to 8.

Dotson came through with 21 points, 6 rebounds, 3 steals and 3 assists.

• Ochai Agbaji came out hot for KU, nailing his first three shot attempts, all jumpers. Those quick 7 points would remain his total at halftime, but his quick start helped KU create some crucial separation against a strong Tech defense.

Agbaji finally scored again when the game was tight in the second half, and his defense, as always, was a must on the perimeter. Plus, taking his first free throws of the game with KU up 1 points with 14.3 seconds left, Agbaji made both on a 1-and-1.

The sophomore had 11 points, 5 rebounds and 2 blocks.

• Christian Braun wasn’t finding open looks from 3-point range early, but he didn’t force the issue, either. The freshman, inches second career start, took hard-nosed drives to the paint instead, seeking contact and getting to the foul line.

His first bucket of the day felt meaningful, though, as he cashed in an open 3-pointer to give KU a double-digit lead minutes after it was a 2-point game.

Tech defended Braun well, though, mostly, and he gave KU 6 points and 5 boards.

• When David McCormack made his return from his two-game suspension, the Red Raiders initially looked more effective on both ends when the sophomore was on the floor.

But McCormack eased his way back and eventually helped KU keep its head above water for a while in the second half, when Azubuike picked up his third foul early on.

His size and athleticism helped him erase a couple of Tech layups. And the sophomore even showed off his passing with one bounce pass assist and another feed on an Isaiah Moss cut.

• Moss missed his first 3-point try and turned the ball over before he did anything productive, but didn’t let a rough beginning to his afternoon deter him.

The senior guard really tok off in the second half, and even put up points in bunches without getting them from deep as one might expect.

• The KU rotation now has two starting level players coming off the bench in McCormack and Moss, and the Jayhawks’ subs outscored Texas Tech’s, 20-5.

Coach Self after KU’s win over Texas Tech - #kubball by KUsports.com

Texas Tech post game after losing to Kansas by KUsports.com

9 blocks, you gave our team a C on D? are you on drugs? Those were deep 3s, mostly contested or off of screens. They have great ball movement.