Dedric Lawson willing, able to take on even more 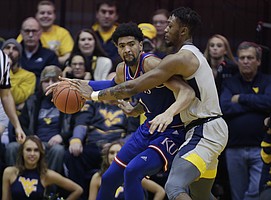 Amid the Kansas basketball team’s ongoing search for consistency, particularly on the road, as sure a fix as exists lies within the capable mind and body of KU’s best player.

It’s been rare this season for the Jayhawks’ offense to establish any constant approximation of a flow, and the stagnation at times muddies into unwatchable territory when they’re playing on an opponent’s floor.

While KU continues to wait for someone else on the roster to prove he can become the everyday perimeter complement to the team’s star big man, the Jayhawks need their most consistent player, junior Dedric Lawson, to become, well, even more dependable.

A versatile scorer and the Jayhawks’ primary big, Lawson hasn’t been pleased with his performances in the team’s back-to-back losses at Kentucky and Texas. The length and athleticism of big men who suited up for both the Wildcats and Longhorns gave Lawson issues. What’s more — because, why wouldn’t they? — every KU opponent’s defensive game plan is centered around taking Lawson out of his comfort zone.

The 6-foot-9 redshirt junior from Memphis would never say this, because he’s a team-first player who always supports and speaks highly of the players around him at Kansas, but Lawson understands he has to adapt in those situations, because KU (16-5 overall, 5-3 Big 12) doesn’t have much else to offer offensively when he’s not rolling.

At Texas on Tuesday night, Lawson dealt with the type of defensive scheme he can likely plan on seeing (or some variation of it) from this point on.

“They were trapping off the bounce, off the catch. I played poorly today,” Lawson said after scoring 13 points on 4-for-15 shooting. “I’ve got to do a better job of finding my teammates when I’m struggling and make shots when I have them.”

It’s difficult to elevate your game to an even higher level when you’re already the most effective player in the lineup. But that’s this team’s current reality.

Does Lawson feel as though he has to post big scoring numbers now?

“I guess so. Yeah, I mean, that’s what this team needs for us to win,” Lawson said following a 73-63 defeat in Austin, Texas. “I’ve got to be consistent. Doing that so we have our best chance of winning. I think the games where I played average or below average, we lost. So I’ve got to be more consistent, do more every night and get the job done.”

Lawson wants to produce more impressive stat lines and scoring totals — not because it will make his resume look more impressive to NBA scouts, but because this KU team that has dropped three of its last four games, with its one victory coming at home, needs eye-popping numbers from Lawson to improve its chances of winning.

In KU’s five losses this season — all on the road — Lawson has been somewhere in the neighborhood of great to good on the glass. But his shooting, particularly in Big 12 losses, has not been up to his standards.

Here’s a rundown of his production in the Jayhawks’ five road defeats:

While much more went into KU’s lone road win to date, at Baylor, Lawson scored his 17 points with efficiency, converting 7 of 12 shot attempts and making 5 of 6 free throws. On that day, he was one of four double-digit scorers for Kansas, a recipe for a victory.

However, it’s rare to see multiple Jayhawks cooking offensively these days. Lawson could help himself and his teammates by going above and beyond as a scorer and a passer. The offense is more likely to click or, at the very least, function and keep the team afloat on the road, when the ball is in Lawson’s hands.

So he should embrace the attention opponents give to him and take it upon himself to study video and work with coaches to discover ways he can remain effective and efficient as he encounters increasingly tough-to-navigate defenses.

The best news for the Jayhawks is that all of this is in Lawson’s wheelhouse. He’s talented and driven, and he didn’t transfer to KU to play on the first Bill Self-coached team to fall short of a conference title since 2004.

Lawson won’t run from this challenge. He welcomes it.

“It’s not a lot on my shoulders. It’s not much,” Lawson said confidently. “Just staying consistent, that’s the game of basketball. It’ll make you good in this game.”

Already the least likely Jayhawk to experience large variances in productivity, Lawson can be an even greater stabilizing force by taking his reliability and scoring abilities to new heights.

“You can’t be an up-and-down guy,” Lawson said.

For now, this KU team will go as far as Lawson can carry them. Perhaps by the time the postseason gets here, he will have some teammates ready to step up their consistency, too.

KU Sports Extra - Ugly Night Deep In The Heart Of Texas by KUsports.com

Lawson and Agbaji discuss KU’s loss at Texas by KUsports.com

Self on KU’s ’so poor’ offensive showing in loss at Texas by KUsports.com

Dotson: Jayhawks need to play with ‘pride’ on road by KUsports.com

Great attitude and I appreciate his passion but he is already being asked to do more than what should be fair. Dedric needs to chew some ass on the court when his teammates pull a knucklehead play.

Outside of OKC, every other Jayhawk needs to improve their effort and production by 25% to 30%. [I won't give a % for Grimes because it would look like I was singling him out]. OOPS, I guess I just did.

This season CAN BE SAVED. As Jay pointed out earlier, we have beaten a lot of very good teams and, of the five losses, honestly, we should have won at least three of them.

I am not giving up hope or conceding the streak is over. If this team plays to it's absolute potential, despite the loss of Dok, we CAN beat any team in America, including Duke!!

I think we get Silvio back tomorrow. If not, he's probably lost for the season,.

We'd all love for that to be true, Suzi. Gut feeling? Or, more info out there?
Rock Chalk!

I did some checking around on Silvio's attorney. https://www.tompsettsportslaw.com

He's got a great reputation.

Until he can move like Caleb, then Lawson will be able to handle more loads. But, for now, he's good enough for this team with double doubles.