Kansas forward Dedric Lawson (1) gets in for a bucket over TCU forward JD Miller (15) during the second half, Wednesday, Jan. 9, 2019 at Allen Fieldhouse. by Nick Krug

In the first couple games of his Big 12 career, University of Kansas forward Dedric Lawson quickly discovered that his name and game were no secret to opponents.

Lawson may have spent his first two college seasons at Memphis and last year as a redshirt, but even before his debut season began at KU coaching staffs around the Big 12 were bracing themselves for his arrival and trying to figure out ways to defend Bill Self’s latest star.

Against both Oklahoma and Iowa State, Lawson learned that foes will collapse on him quickly and from all directions, because he’s the focal point of KU’s offense — and Kansas lacks the 3-point shooters around the perimeter to keep defenders honest. If they can swarm at Lawson without the threat of getting burned from downtown as a result, why not clog the space surrounding KU’s most effective offensive player every time he touches the ball?

A smooth, 6-foot-9 scorer who is now averaging 19.5 points on the season and hitting 50.2 percent of his shot attempts, Lawson went 6 of 17 and scored 13 points versus OU on Jan. 2. This past weekend at Iowa State he went 5 for 11 to finish with 13 points and, more troubling, turned the ball over six times.

But Wednesday against TCU, Lawson looked like someone comprehending what it takes to succeed following recent encounters with pesky defenders. He scored a season-high 31 points on 10-for-19 shooting and turned the ball over three times in 35 minutes.

“That’s what they do,” TCU head coach Jamie Dixon said of KU playing through Lawson. “We prepared for it. We double-teamed and yet he still got 31, so that’s not a good sign.”

So how did Lawson do it? The man who will now have to carry the Jayhawks’ offense the rest of the way with Udoka Azubuike out for the season said he spent some quality time with his iPad a few nights this week.

“Just chillin’. Ran out of shows on Netflix and I just popped in that,” Lawson joked of reviewing game footage from KU’s 1-1 start to conference play.

“I just looked at film from the way Iowa State played and the way Oklahoma played. They double-teamed a lot and I just tried to get closer to the basket as possible, tried to go to my moves quicker,” Lawson said of the major takeaways from his studies. “When they double-team, try to find the right teammate and just try to play basketball the right way.” 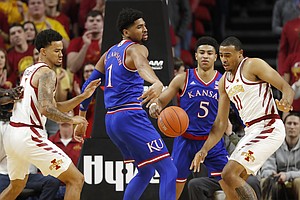 Iowa State's Talen Horton-Tucker, right, and Nick Weiler-Babb, left, fight for the ball with Kansas' Dedric Lawson, (1) and Quentin Grimes (5) during the first half of an NCAA college basketball game, Saturday, Jan. 5, 2019, in Ames, Iowa. by AP Photo/Charlie Neibergall

A former assistant coach and math teacher of Lawson’s from his prep days at Hamilton High, in Memphis, facilitated the KU forward’s fine tuning. Lawson said he communicates with Kevin Conley “every single day,” and his old confidant often offers him feedback when the Jayhawks’ versatile big tells Conley what he needs to work on.

It was Conley who advised Lawson to be more decisive with his moves when he gets the ball — “Just being quick with your moves, going to your moves quick before the double-team comes and things like that,” Lawson related.

Lawson said his former coach has helped him develop since he was a 9th-grader in Conley’s math class.

“That’s how the relationship started. He didn’t know how smart I was in math,” a grinning Lawson added.

Much in the way Lawson has grown more comfortable with Big 12 defenses over the past week-plus, his effectiveness seemed to enhance over the course of KU’s home win over TCU. After going 3 for 6 from the field (2 of 4 in the paint) in the first half, Lawson later proved he can be the go-to player the Jayhawks need. Playing all but one minute of the second half, Lawson scored 18 of KU’s 37 points, shooting 7 of 13 from the floor (6 of 8 in the paint).

As outlandish as it may come across on first glance, Lawson clearly is capable of doing even more for KU. Just ask Self about how comfortable his best player looked against TCU.

“I thought Dedric, even though he wasn’t great, he gets 31 and 14 and puts us on his back down the stretch,” Self said. “He had more space tonight probably than he would have with Dok in the game.”

We’re just now beginning to see what type of offensive force Lawson can become for KU. With Azubuike sidelined, Lawson will have to touch the ball as often as possible to maximize KU’s offensive efficiency. Lawson even showed against TCU he just might be able to provide an added bonus on that front as a shooter, knocking down 2 of 4 3-pointers (he entered the game having made only 4 of 24 on the season).

“It felt great,” Lawson, a career 29.2 percent 3-point shooter, said after hitting multiple 3’s for the first time this season. “That’s something I do a lot. Every day I shoot them and I keep telling myself they’re going to fall. ‘Just keep shootin’ ’em. Just keep shootin’ ’em.’ And tonight a couple of them fell for me.”

Of course, Lawson’s primary role will be to score inside, keep drawing the attention of opposing defenses and continue evolving as a distributor with so many athletic guards playing around him.

Lawson knows, too, that for KU to truly peak this season, he will have to do more defensively than secure rebounds (his 8.1 defensive boards and 11.3 rebounds overall both lead the Big 12).

“Just keep trying to be an inside presence offense and defensively,” Lawson assessed of his role moving forward, “not just let a guy get easy baskets around the rim — that’s something Udoka did well for us. And just trying to improve in all areas of the game.”

And keep that iPad handy, so he can persist in his ongoing transformation as a high-volume scorer for No. 7 Kansas (13-2 overall, 2-1 Big 12).

What a classy young man. A real tribute to his team and to his former teacher and current mentor from his Memphis school days. He is going to experience an ever evolving defensive style in attempt to slow him down and his positive attitude and fortitude to overcome that is great to see. Way to go, Dedric, so glad you are a Jayhawk.

Coach will never let a player get complacent- which is great, and pushes them TO greatness.

But for us mere mortals, coach saying Dedric was not great is hilarious.

It's really not if you watched the game. He was most definitely our best player, I don't dispute that...... but he's still getting stuffed at the rim too often and being muscled away from the basket by defenders and he still forces the issue sometimes when he needs to kick it out and reset. I think Dedric would tell you he's got some improvement to make as well.

This team will go as far as Dedric can carry them. Even got a couple treys last night. Worked the ticket office before the game and locked up AFH after everyone left. Hope he can stay out of foul trouble.

I was flabbergasted that Jamie Dixon didn’t have a constant double team on Lawson on the block. Lawson was catching the entry passes and had lots of room to operate. TCU was playing Lawson straight up and choosing to bring the pressure on KU’s perimeter players. You are probably not going to beat the Jayhawks with that sort of defensive scheme. Look for Baylor to learn from Dixon’s mistake.

Great article, Benton. I also notice what separates Lawson from Dok is Lawson's ability to spin move to the basket - thanks to his limited athleticism and of course, his ability to shoot 3pt.. Yes, he is quicker executing drop steps - that really looks good. Also, he fakes a lot more in that game. An almost complete player. What I wish to see is those fake pumps leading to dunks and dunks ala KAT.

As soon as he swaps out his genes for fast twitch ones he'll start finishing consistently with dunks...

There's still hope, if he can spin that fast, Shannon. All he needs is a bit of COACHING and repetition, just watch...

Spinning fast doesn't mean he can run fast, jump high, or any other "fast twitch" activity. No amount of coaching or repetition will change that.

Not yet a week ago, Benton wrote an article entitled, "Dedric Lawson not yet take-charge leader KU needs".

This article comes with the headline "Dedric Lawson beginning to grasp how to deal with defenses designed to stop him."

Now while it's true that being a "take charge leader" and playing around defenses targeting you are not exactly the same, I don't know how you can look at the TCU game and say any other player is more of a leader than Dedric Lawson is. That game was played 4 DAYS after Benton proclaimed him "not a leader". More to the point, I argue that the fact that Dedric has consistently been dealing with defenses who KNOW he's a weapon and has still been producing solid knows argues louder than anything that he has shown leadership on this team and he HAS taken charge.

The problem with the perspective of a lot of these articles is that the opinion changes so quickly about players from one game to the next. You need to see trends that extend over at least 3 or 4 games before you can say things like "he's beginning to figure this out" or "he's not ready to be a leader". These conclusions a lot of times are merely sugar highs and lows.

The way to beat Kansas is to stuff the low block and make the KU guards shoot (particularly Grimes and Garrett).

They will fall eventually.

Who was the last Jayhawk to match Dedric's mad double double skills? I can seem to recall who has had as many. Curious also if their averages were as high as Dedric with just about 20 points per game. He's a real beast! Smooth beast, but beast none the less.

TRob was the last one who could consistently get 10+ rebounds. I think he finished the season averaging 17.7 pts and 12 reb. He had 27 double doubles out of 39 games (70%) his Junior year while only scoring under 10 points once.

Lawson's had a double doubles 11 out of 15 games this year (73%) while averaging 19.5 pts and 11 reb. So very similar numbers though they got them completely different ways. TRob didn't know what smooth was and never had a "quiet" 20/10 game like Lawson has almost every game.