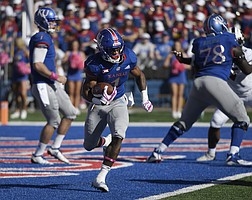 Pooka Williams runs through the TCU defense Saturday at David Booth Kansas Memorial Stadium. The Jayhawks claimed a 27-26 win over the Horned Frogs, which ended their 14-game skid in league play. by Mike Gunnoe

From the instant this list was devised — and likely from the moment you or anyone who has checked out any of the entries came across it — the man who would occupy the final and No. 1 spot never was in doubt.

Sophomore running back Pooka Williams is the best player in the program, even if his offseason couldn’t have gone much worse.

He, of course, won’t play against Indiana State on Saturday, while serving his one-game suspension for an offseason arrest and domestic battery charge — a case that concluded with Williams reaching a diversion agreement.

Williams is set to return to the lineup in Week 2 against Coastal Carolina, a day that will also mark his first time — if KU makes him available — fielding questions from a contingent of reporters since joining the program. (A rule under the previous coaching regime didn’t allow freshmen to do interviews.)

Maybe we’ll get a better sense then of how sorry he is for his actions and how he plans to make use of the second chance KU has given him.

In a press release in July, Williams stated, in part: "My behavior was unacceptable, and I'm very sorry to those who were impacted by my poor choices. I am disappointed in myself, not just as a man, but as a student-athlete looked up to by younger kids.”

Williams would be entering this season with far more fanfare (probably not quite as much as his head coach, Miles; but close) if not for his “unacceptable” actions in December against a woman with whom he was in a relationship.

KU’s Office of Student Conduct and Community Standards has required that Williams be subject to probation until he graduates, attend monthly meetings with a university conduct officer, complete 40 hours of community service, and complete a sexual violence accountability course through the university's Sexual Assault Prevention and Education Center.

The KU football program has rightfully scaled back on touting its leading returning rusher. No hype videos. No instances of Miles gushing about Williams’ skill set.

Because of the ugly nature of the incident it’s difficult to talk about Williams and his obvious talents. You can’t gloss over something like this.

The only good news for Williams in all of this is he still has an entire career and lifetime ahead of him to prove he is remorseful and capable of evolving as a human being.

In 2018, Williams produced four 100-yard rushing games and a 100-yard receiving game in his 11-game freshman season. His 1,660 all-purpose yards on the year rank him third all-time on KU's single-season list.

After rushing for 1,125 yards and seven touchdowns, to go with his 289 receiving yards and two touchdown catches, Williams became the first All-Big 12 first team running back from KU since Jon Cornish, in 2006.

For this program, Williams is a once in a decade (maybe longer) type of talent. Soon, he’ll make his return to the field and continue trying to rehabilitate his public image.

His coaches and teammates indicate Williams is on the right track. Now it’s up to him to demonstrate KU made the right choice in granting him a second chance.

Little to do with predicting his play this season or speaking of his talents... a wasted click to hear you report the past, off field incidents.

Amen! I thought that Tom Keagon had revisited the LJW. Endless extolling the occurrence in question, like revisiting the rather droll reciting of the past W-L record, or the fact that one should simply wait for Coach Miles to identify the starting quarterback. I would you just identify the genre in your title, so as to not waste time in reading.

It will be interesting to see how this staff uses Pooka. While obviously quite talented, Pooka is not a Leonard Fournette that can be leaned on endlessly without negative consequences down the road. He is deadly in space and complimented by a host of other backs. How will he be used? That’s a much bigger question.

On a side note, aren’t you already cringing at just the thought of the first presser? I hope that the KU staff lays out the ground rules right from the start, We’re here to talk about the football game. Questions that are off topic will not be answered. Repeated off topic questions will result in an escort to the exit. There really isn’t anything more that needs to be known about the off-field issues.

Your punishment is your punishment and once sentence is served it should be done. After that it's "That is over and done with", "No comment" and "No questions will be answered".