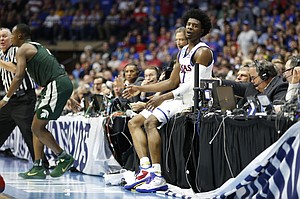 Kansas guard Josh Jackson (11) protests a foul called against him after he thought he was pushed into the scorers table during the second half on Sunday, March 19, 2017 at BOK Center in Tulsa, Okla. by Nick Krug

Leading up to next week’s NBA Draft, many have scrutinized the merits of Josh Jackson’s basketball skills and debated just how high those attributes should carry him up the big board of a loaded rookie class.

The defense, passing and athleticism Jackson displayed during his one season at Kansas make him worthy of a top pick, but every time someone takes a deep dive into his draftability, his off-the-court stumbles from his time in Lawrence come up, too.

As the Journal-World reported in May, the 20-year-old prospect reached a diversion agreement in a case of criminal damage to property, which included writing a letter of apology and anger management classes.

Fielding questions from the media for the first time since then earlier this week in Los Angeles, following his second pre-draft workout with the Lakers, Jackson didn’t mind addressing those mandated classes when a reporter asked him about the matter.

“There is some truth to that. I have been taking an anger management course,” Jackson said. “I’m just about wrapping it up right now. It was just something I had to do and I learned from the mistake that I made. I’m making it through it.”

The 6-foot-8 wing, who could end up playing in L.A. if the Lakers decide to take him with the No. 2 overall pick, said he had learned from the experience.

Jackson, no doubt, has answered questions on the matter every time he has spoken with an NBA decision-maker over the past couple of months. And franchises all have ways of performing in-depth background checks on incoming rookies, especially those who could soon become the young face of the team. Owners and management don’t want to invest their money or the organization’s future in a person who will bring them unnecessary headaches.

It doesn’t appear teams are too worried about Jackson the human being, despite his mistakes. If they were, you would hear predraft reports of his stock dropping and teams leaning toward staying away from him.

With a week to go before the big night in Brooklyn, if anything, Jackson is trending upward, challenging UCLA’s Lonzo Ball for the No. 2 spot. The way he handled the questions regarding the anger management class that accompanied his diversion is a sign he’s addressing his maturity, as well as his game, which will only impress the NBA teams that are paying very close attention.