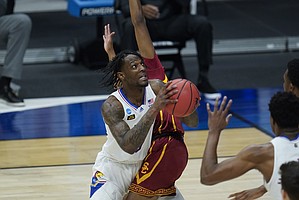 Kansas guard Marcus Garrett (0) tries to shoot around a USC defender during the first half of a men's college basketball game in the second round of the NCAA tournament at Hinkle Fieldhouse in Indianapolis, Monday, March 22, 2021. (AP Photo/Paul Sancya) by Associated Press

1 – Marcus Garrett — In what might have been his last game as a Jayhawk, the KU senior led the Jayhawks with 15 points, 6 rebounds and 4 assists and was one of the few players on the KU roster who was not overwhelmed by the size and stature of the USC roster. His poise didn’t always lead to good outcomes, but Garrett competed hard all night and did everything he could to keep KU in it.

2 – Dajuan Harris — Made the only shot he attempted — a 3-pointer that seemed big at the time — and also dished four assists with no turnovers in 28 minutes. The point guard position is his at Kansas for the next few seasons. He might get some help in the backcourt, but there’s no question that Harris will be a big part of KU’s future.

3 – Christian Braun — The numbers don’t do his effort justice. No, Braun didn’t shoot it very well (who did for KU?), but he attacked, tried to fight and looked unafraid throughout the first half as the Jayhawks desperately tried to stay in the game.

4 – Tyon Grant-Foster – He had absolutely nothing to lose when he came in in the second half, so his performance is graded on a bit of a curve. But still, he flashed a couple of good moments and showed why the coaching staff was so high on him in the first place earlier this season. Next up: Grant-Foster needs to become more consistent and learn the importance of defense — team and individual — so he can use his athleticism and offensive skills to help this team out.

5 – David McCormack — The KU big man still just two games into his return from COVID-19 tried to follow the game plan of using his bulk to bully the Mobley brothers. It just didn’t matter. They were too long and McCormack was a little too wild. He finished with 5 points, 4 rebounds and a block in 22 minutes.

6 – Ochai Agbaji — He started slow and disappeared at times in the first half. But then found a little bit of life early in the second. It was not nearly enough, though, and KU’s leading scorer and best shooter finished with 8 points, 5 rebounds and 2 steals but went 3-of-13 from the field (2-of-8 from 3-point range) to get it.

7 – Mitch Lightfoot — Lightfoot battled for the 11 minutes he was on the floor, and his rebound and put-back at the halftime buzzer that was waived off because of a travel was very nearly an important spark for struggling Kansas. It likely would not have mattered in the big picture, but it shows the kind of effort and attitude Lightfoot has at all times.

8 – Jalen Wilson – Whether because of his recent case of COVID or the matchup or both, Wilson just didn’t have it on Monday night and never really got much of an opportunity to find it. He played just eight minutes, missed all three shots he attempted and struggled with foul trouble, as well. Tough ending to what was a solid first season for the KU wing.

9 – Bryce Thompson – Played 15 minutes and missed five shots while recording 1 assist and 1 foul. You can see the desire and drive to be great all over Thompson, but he still has a ways to go before he gets there.

KU Sports Extra: An Ugly Ending in Indy by KUsports.com

Bill Self, Marcus Garrett after KU was eliminated by USC in NCAA tourney by KUsports.com

Isaiah Mobley, Andy Enfield after USC cruised past Kansas in Round 2 of NCAA Tournament by KUsports.com

Maybe this season wasn't what we fans are used to but there are many, many universities out there who would absolutely love to have the season our team had this year. I am proud of our guys, the way they worked so hard, played so hard, tried so hard, and succeeded far more than not. Now, it's on to next season. I can't wait!