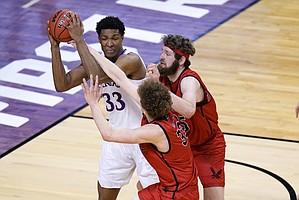 Eastern Washington forward Tanner Groves (35) is pressured by Kansas guard Christian Braun, left, and Kansas guard Bryce Thompson (24) as he goes up for a shot during the second half of a first-round game in the NCAA college basketball tournament at Farmers Coliseum in Indianapolis, Saturday, March 20, 2021. (AP Photo/AJ Mast) by Associated Press

1 – David McCormack — There’s no way to overstate it: McCormack’s 22-point, 9-rebound effort in 25 minutes on Saturday saved KU’s season. After not starting, the big man played every minute that mattered and provided Kansas with both the needed scoring punch and some resistance to Eastern Washington big body Tanner Groves, who scored 35 in EWU’s 93-84 loss to third-seeded Kansas.

2 – Dajuan Harris — The redshirt freshman was sensational throughout this one, looking for his shot, attacking the rim and setting up teammates. His defensive intensity also played a huge role. As soon as he checked into the game, with the Jayhawks trailing 9-0, the entire tide turned for KU’s defense.

3 – Marcus Garrett — He’s not known for his outside shot, but he got red hot and, like Harris, was left wide open. The senior made EWU pay by knocking in three 3-pointers and finishing with 20 points, 8 rebounds and 3 assists in 33 minutes. Most importantly, after picking up 3 first-half fouls, he never fouled again.

4 – Ochai Agbaji — A slow start turned around quickly as Agbaji scored 21 points on 9-of-17 shooting and finished with 21 points, 7 rebounds and 3 assists in 39 minutes. He hit a couple of timely 3-pointers that helped KU stay in it and then got hot at the rim, as well.

5 – Christian Braun — He hit a couple of big time 3-pointers and reached double figures, with 12 points to go along with 4 rebounds and 4 assists despite shooting just 2-of-11 from the floor. By far the most important part of his day was the 39 minutes he played to help anchor KU’s defense.

6 – Bryce Thompson – Made just one shot in six attempts during his first taste of the NCAA Tournament. But it was a big one that helped KU erase an 8-point halftime deficit.

7 – Mitch Lightfoot — Stated but played just 7 minutes and didn’t record much in the way of statistics. His bucket off a pick-and-roll and missed 3-pointer from the top of the key in the first half were the highlights.

8 – Tyon Grant-Foster – Played just two minutes at the end of the first half and grabbed 2 rebounds and dished an assist to go along with one turnover.

Bill Self, Marcus Garrett speak to media after KU's 93-84 win over EWU by KUsports.com