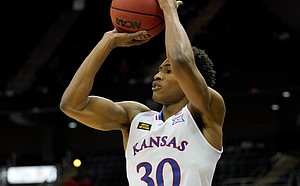 Kansas guard Ochai Agbaji attempts a jumper during the Phillips 66 Big 12 Basketball Championship at the T-Mobile Center in Kansas City, Missouri on March 10, 2021.

1 – Ochai Agbaji — Shot lights out and flashed more emotion than we’re used to seeing from the junior from KCMO. A career-high 26 points in your hometown? Doesn’t get much cooler than that. And Agbaji was great in just about every way in this one.

2 – Dajuan Harris — It’s not hard to see Dajuan Harris’ confidence rounding into form. The redshirt freshman is more assertive on offense and his usual pest self on defense, and both traits were on full display in the win over Oklahoma on Thursday night.

3 – Marcus Garrett — There were a couple of moments in this one where Garrett reminded people why he was the reigning national defensive player of the year. His offense was also on point, as he used his strength and skills to muscle his way to 17 points while doing all of the other things we’re used to him doing.

4 – Mitch Lightfoot — Lightfoot told Bill Self that he was going to play a great game. And then he went out and did it. Confidence through the roof. Toughness. And more scoring punch than we normally see. A great game on a night when KU played without its best big man.

5 – Jalen Wilson — Shot just 2 of 10 from the floor and missed a few easy ones. But still managed to score nine points and grab nine boards, while hitting four clutch free throws late.

6 – Christian Braun — Braun missed the four shots he attempted (3 from 3-point range) and didn’t do much else on the stat sheet, but did play a role in KU’s strong start during his 28 minutes.

7 – Bryce Thompson – Made just one shot in four tries, but stuck his nose right in there and played some pretty tough defense in 19 minutes.