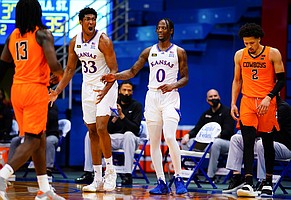 Kansas forward David McCormack (33) erupts after being called for a foul as Kansas guard Marcus Garrett (0) tries to settle him down during the second half on Monday, Feb. 8, 2021 at Allen Fieldhouse. by Nick Krug

1 – Marcus Garrett — Kansas coach Bill Self said the Jayhawks would’ve been in a world of hurt had Garrett not delivered offensively and led the charge defensively in the first half. For that, he lands on top tonight. The senior guard finished with 17 points on 5-of-7 shooting and hit 7 of 8 free throws. He also played a major role in making OSU freshman Cade Cunningham shoot just 7-of-18 from the floor.

2 – David McCormack — The junior big man who played with a significant size advantage all night, made up for a poor first half with a monster second half. In short, McCormack did exactly what Kansas needed him to do and seemed to get better as the game went along. He finished with 23 points on 7-of-16 shooting (6-of-9 in the second half) and added 10 rebounds a couple of blocks.

3 – Christian Braun — Few shots were bigger than his three second-half 3-pointers that helped KU maintain its lead and came in timely moments. For the second straight game, Braun let it all go and played every possession with the kind of fire that he’s always been known for. The result was a 15-point, 10-rebound night that also included 3 steals.

4 – Jalen Wilson — The third member of KU’s double-double party (11 points and 11 rebounds) missed all three 3-pointers he shot and was still just 4-of-12. But he has now put together a couple of offensive games in a row that have looked like they’ve come from a more confident and comfortable player. It appears as if it may only be a matter of time before the lid finally comes off again for Wilson. Until it does, he still finds ways to make an impact by playing hard and hitting the glass.

5 – Ochai Agbaji — Agbaji was the only thing other than Garrett that even resembled offense in the first half. He hit two early 3-pointers that were big in keeping KU in it after another rough start and finished with 4 steals and 2 assists to help offset his 4 turnovers.

6 – Mitch Lightfoot — Didn’t get much in the way of a sustained opportunity, even in the first half with McCormack struggling. He had a couple of post-ups that led to shots, but he missed the both and finished with 1 point and 2 boards in just under 9 minutes.

7 – Tristan Enaruna — Take the good with the bad with Enaruna, who still hasn’t quite turned the corner, but continues to have moments where he looks like he could really help this team. His two steals were big. His one turnover was worth forgetting.

8 – Dajuan Harris — Played just three minutes — when KU went to five guards in the first half — and recorded no other stats than one turnover.

9 – Tyon Grant-Foster – The best thing about Grant-Foster’s night was that he was out there at all. After an ankle injury kept him out of the West Virginia loss, the KU junior played three minutes and did not record a single statistic.

Kansas head coach Bill Self following 78-66 win over No. 23 Oklahoma State by KUsports.com

KU's David McCormack on key to playing well in second half against OSU by KUsports.com

Kansas senior Marcus Garrett on importance of home win against Cowboys by KUsports.com