McCormack dominates down low to lead Kansas to a huge 71-58 win over No. 2 Baylor 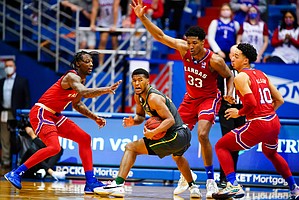 1 – David McCormack — Arguably the best game of Big Dave’s career — And it was clear it was going to be that way from the jump of Saturday's 71-58 win over No. 2 Baylor. McCormack scored KU’s first eight points and finished with 20 points on 8-of-10 shooting in 25 minutes. He also added 3 rebounds and a few emphatic blocks, not to mention the emotion he brought to the floor.

2 – Marcus Garrett — His senior night featured a classic line — 14 points on 4-of-9 shooting, with 7 rebounds and 2 assists. More important than any of that was the job he did on Baylor All-American Jared Butler, who finished with five points on 2-of-9 shooting in 30 minutes.

3 – Jalen Wilson — If he had hit his free throws, it would’ve been another double-double for Wilson — easily. Instead, he finished with just 7 points (1-for-4 at the FT line) but also added 14 rebounds and a steal in 31 minutes.

4 – Mitch Lightfoot — Lightfoot played just 13 minutes, but in terms of big-plays-per-minute, he may have led all of college basketball on Saturday night. A block, two huge buckets and four tough rebounds played a huge role in KU’s victory.

5 – Christian Braun — It took him a while to get going and he scored seven of his 11 points at the free throw line, but all seven of those free throws were huge, especially when you consider that his teammates combined to make just 11 of 17 without him. Braun also added 9 boards and 3 assists in 37 minutes.

6 – Ochai Agbaji — It wasn’t Agbaji’s night shooting the ball, so he found other ways to help Kansas win. He hit the glass, had a huge tip-in and also dished 4 assists while playing 37+ minutes.

7 – Dajuan Harris — His second-half 3-pointer was one of the biggest shots of the night because it helped Kansas maintain its cushion and was one of just 3 made 3-pointers all night for the Jayhawks. Harris finished with 5 points and 2 boards in 9 minutes.

8 – Bryce Thompson – Thompson did a good job of not forcing the issue. He shot just twice, hit one of them (a big first-half 3-pointer) and dished 1 assist to go with 3 turnovers.

9 – Tristan Enaruna – Played spot minutes late in the first half and finished 0-for-1 from the floor with one rebound.

Kansas coach Bill Self on what stood out during big win over Baylor by KUsports.com

Kansas big man David McCormack on his late block in 13-point win over Bears by KUsports.com

Smart play by Braun & Juan - we need to execute more cuttings like that. Excellente!
If Juan keeps shooting/contributing like that each game - even with just 5 points; that'll help our chance to win.