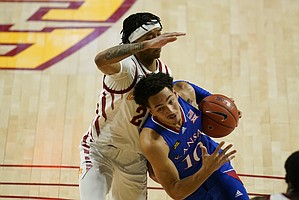 2 – David McCormack — His performance matched the tone of the game, but his final numbers looked much better. McCormack finished with 13 points and 8 rebounds on 6-of-12 shooting before fouling out.

3 – Ochai Agbaji — Hit just 3 of 10 shots from the floor and finished with 9 points in 38 minutes. But his 3-pointer from the wing midway through the second half put Kansas up 10 and essentially put the game out of reach.

4 – Christian Braun — The numbers weren’t quite there and he played just 28 minutes, but even with a 1-of-5 showing from 3-point range, Braun finished 5 of 11 from the floor and tallied 11 points while playing an aggressive brand of ball on both ends.

5 – Marcus Garrett — Scored just four points on four shots, but dished five assists and played a key role in KU’s strong run to close the first half that flipped the game in the Jayhawks’ favor.

6 – Tristan Enaruna — Scored just 3 points on 1-of-3 shooting, but grabbed 3 rebounds in the limited time he was out there and was willing to pull the trigger on his 3-pointer when some of his teammates were gun shy.

7 – Bryce Thompson – Did not provide the same kind of spark that he showed on Thursday night against the Cyclones, but played hard and looked to assert himself. The shots just didn’t go in, and he added next to nothing to the rest of his line in 14 minutes.

8 – Mitch Lightfoot — Not his best game offensively. He missed hook after hook down low to finish 1-of-6 from the floor with 2 rebounds in 14 minutes.

9 – Tyon Grant-Foster – Missed his only shot attempt in 4 minutes of playing time, but did grab two rebounds.

10 – Dajuan Harris — Recorded no stats in 2 minutes of playing time.

David McCormack on KU's team defense in 64-50 win over Iowa State by KUsports.com

Jalen Wilson after leading Jayhawks with 22 points against Cyclones by KUsports.com

KU’s offense was lousy today. Defense won it. KU made a dozen steals and the Clones had 23 turnovers. Our traps did the deed.