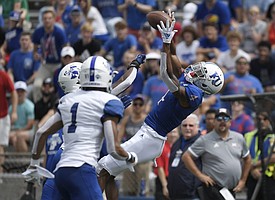 1 - Andrew Parchment - The only thing this guy didn't do on Saturday was score a touchdown. Eight catches. 121 yards. A two-point conversion pass. Two key grabs for first downs on KU's game-winning drive. There's a reason the junior from Fort Lauderdale, Fla., was talked about all offseason. And he showed up big time in his first game as a Jayhawk.

2 - Daylon Charlot - Speaking of showing up big time, how about the debut for the senior wideout who famously started his career at Alabama? Six catches. 79 yards. The winning touchdown and a couple of big time catches on the drive that delivered it. The talk all offseason has been about Charlot finding his confidence again. That showed on Saturday and it served the Jayhawks well in every way imaginable.

3 - Dru Prox - Anytime you make eight solo tackles and earn special mention from the head coach, you're going to look back and think you had a pretty good game. Not only did Prox check both of those boxes, but his sack of Indiana State quarterback midway through the fourth quarter that went for a 12-yard loss and ended the Sycamores' drive was among the three or four biggest defensive plays of Saturday's win.

4 - Hasan Defense - Like McCullough, Defense delivered one solo tackle and one interception in this one. His just happened to put six points on the board and will forever go down as the answer to the trivia question "Who scored the first points for Kansas under Les Miles." With the KU offense getting off to a slow start, Defense's INT was a huge play that helped Kansas establish control of the game early.

5 - Jeremiah McCullough - Although his interception did not put points on the board like fellow DB Hasan Defense's first-quarter pick-6, it did keep points off the board for Indiana State and helped Kansas maintain control for most of the grind-it-out type of game.

6 - Carter Stanley - The fifth-year senior QB got away with a couple of bad throws when his receivers bailed him out and made outstanding catches. And he also put the ball on the ground more than any coach would like. But his 69% completion percentage was good, his command of the offense and the huddle was great and his play on KU's gotta-have-it, do-or-die drive late in the game was terrific. Beyond that, he avoided adding an interception to his stat line and showed the leadership skills that have drawn teammates to him throughout his time in crimson and blue. Plenty of room for improvement here, but Stanley wasn't bad and the Jayhawks won.

7 - Khalil Herbert - Opened the game with a 33-yard run that, for a brief moment, looked like it might go for six. His other 16 carries, however, netted just 55 yards, 3.4 per carry. I would've thought both Herbert and Dom Williams (9-34) would have had much better days on the ground. But you have to figure that the Sycamores scouted KU and knew their strength was on the ground. Getting Pooka Williams back next week should only help Herbert's effectiveness.

8 - Mike Lee - Mike Lee did what Mike Lee does - flew around all game, put a couple of serious licks on ISU players and did it all with the swagger of a senior who has made a lot of plays and played a lot of good football during his time at Kansas. Finished with four tackles (3 solo) and one pass break-up. Great start to his final season.

9 - Darrius Moragne - Seven solo tackles and a sack is going to get you on this list any day of the week. Moragne was strong up front all afternoon and KU is going to need a lot more like that from him the rest of the way.

10 - Azur Kamara - By far the biggest thing that stood out to me on Saturday about Kamara was his ability to play in space. He got off the edge well and showed some power at times, too. But he looked comfortable in space and made a real nice open-field tackle in the first half to force an Indiana State punt.

Agree with just about everything but would take issue with Stanley. I’m not sure that I’d have him in the Top Ten. Several near-picks, lots of under-thrown balls, the awful pass to Dom that ended up killing a drive. Just can’t see that overall performance being rated as anything but below-average.

I hear what you're saying, but delivering to a near flawless level on the must-have, game-winning drive got him in there.

Out of curiosity, who would you have put in the Top 10 if you bumped Carter out?

I wanted to put an O-Lineman or two, but they were pretty average on the whole, especially with pass protection in the 2nd half. I thought the left side looked great at times but not so great at others.

I also agree with your assessments, Matt. Though he probably didn't have the kind of game he was hoping for, Carter Stanley deserves to be in the top ten as you say, because of his management of the game winning drive.

A small nit to pick. Number 9 on the list, Darius Moragne is misspelled as "Morange", both in the header and in the description of his performance. His name is correct in the "Season Standings" list below.

Matt - fair question and my answer is....I don’t have an answer. But I agree that the OL was very disappointing in almost every respect.

Would love to see a “grading” of coaching for each game. Clock mismanagement on the drive was borderline criminal. The two-point conversion call was brilliant.

The big question, of course, is: where do we go from here? Your old teammate who now works another place to the east, predicted us at 2-10 this year with a loss next weekend. We looked a little like a 2-10 team on Saturday. I’m anxious to see what this staff can get done with some game film, an addition at RB and their experience. We definitely need to step it up a notch.

Isn’t “clock mismanagement” only a concept in this case because we scored so quickly? It would seem very plausible to have needed quite a few more plays and time if we hadn’t been successful on big chunk plays. Much better to score with time remaining (and trust the D to produce again) than to run out of time.

I’d agree with Kit. Darius’ 7 tackles seems a lot closer Dru’s 8, and maybe even better considering it came from the DL.