Basketball powers off to good starts in football 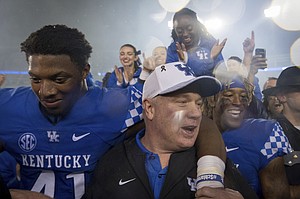 Carrying the label “basketball school” doesn’t make recruiting any easier for football coaches, but multiple basketball powerhouses, including a pair ranked in the top 25, are showing it is possible to overcome the label.

No. 17 Kentucky (4-0): Mark Stoops has taken the slow, steady approach to building a program, exercising the discipline to avoid quick fixes in recruiting, and it’s paying off in a big way in his sixth season on the job.

The Wildcats hammered visiting No. 14 Mississippi State, 28-7, Saturday to move into the top 25 for the first time since 2007. Kentucky won at Florida, 27-16, in the second week of the season.

Stoops went to a bowl game for the first time in 2016, ending the school’s five-year drought, and is primed to take the Wildcats to a third consecutive bowl game.

If Stoops can get to nine victories this season it will be just the second time in school history for Kentucky, which first won nine in 1949 under Bear Bryant.

David Cutcliffe, in his 11th season in Durham, ended an 18-year bowl drought in his fifth season on the job and will take the Blue Devils to their sixth bowl game in 18 seasons. He has executed a remarkable turnaround of the Duke program.

No. 36 (based on votes received) Syracuse (4-0): Everybody but the fans of the team Syracuse plays that week should root for the Orange to win so that they can watch third-year coach Dino Babers’ stirring postgame speeches on Youtube. He’s a truly inspirational figure and his players are buying what he’s selling.

Syracuse ranks 10th in the nation with 49.5 points per game and not all of those points have been scored on pushovers.

You have to love the line, “The last time it happened the ’66 Mustang was the baddest thing on the road,” hollered by Babers after a 30-7 pasting of Florida State. He was referencing Syracuse football being back on the map.

The Orange are trying to end a four-year bowl drought.

Syracuse hasn’t always been known as a basketball school. The Orange were a national powerhouse in the mid-20th century decades under coach Ben Schwartzwalder, a decorated World War II hero.

The Orange had a couple of more recent stints of success, but had fallen on hard times.

Also, running back Ernie Davis, the first African-American Heisman Trophy winner, was the first pick of the NFL draft but never played a game after being diagnosed with leukemia. He died at the age of 23.

Indiana (3-1): True freshman running back Stevie Scott rushed for 204 yards and a touchdown in his first collegiate start, a 21-16 victory over Virginia, and added 114 yards and two touchdowns the next week in a 38-10 blasting of Ball State. Michigan State limited him to 18 yards on 11 carries and defeated the Hoosiers, 35-21, so the jury remains out on whether Indiana’s improvement will translate to strong play in the Big Ten, but so far anyway Indiana looks like more than a basketball school.

sucks seeing UK doing better in FB..KU could be just as good if they invested in the time and money like UK did..KU has NEVER done that for its FB program

If KU would've done this 10 years ago maybe, just maybe if the FB program was half way decent we could've been accepted into the B1G.

2007 was a once in a lifetime season and I don't ever expect to reach that level again on the gridiron but to regularly win 4-8 games a year is not unrealistic and would satisfy me as long as we don't run up double digit losing streaks to anyone.

7-8 games is doable. having 4 wins is not accomplishing anything and will get many coaches fired except KU. then the coach gets a bonus.

4 would be the minimum but not for every year. As long as we are going to bowl games every other year or so. Which is not that difficult since you only need 6 wins.