Thomas Robinson (0) looks at Ricardo Ratliffe (10) after Robinson made a layup to bring the Jayhawks within one point of the Tigers with two and a half minutes left in regulation. The Jayhawks went on to win 87-86 against the Missouri Tigers, Saturday, Feb 25, 2012.. by Mike Yoder

Kansas basketball coach Bill Self has a chance to run his record in Big 12 regular-season payback games to 19-0, but in order to do so he'll have to score road victories against Texas Tech and Oklahoma State.

So far, 15 of the 17 payback victories have come in Allen Fieldhouse.

The years and scores involved in Self's 17-0 payback record: 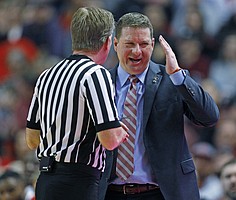 Texas Tech puts its own 17-game winning streak on the line Saturday. The Red Raiders have won their last 17 games in United Supermarkets Arena, eight in Big 12 conference games, nine against nonconference opponents.

Tech coach Chris Beard is attempting to upgrade the nonconference schedule, but will have a tough time lining up big-name opponents because it will be a tough place to pick up a road victory.

A look at details of the Red Raiders' 17-game home winning streak: